Over the years I’ve been asked about “Twin Peaks,” which I almost always demurred due to the fact that when it was on the air, my parents had enforced a No TV rule. This didn’t bother me then since we didn’t have cable anyway. Also I had friends who were always willing to put up with my presence in front of their televisions despite the oddness of the hour. I didn’t want to admit that I never got around to watching “Twin Peaks” even though it sounded like something I would really dig.

But then I was asked to paint them for real and there’s just no putting off in catching up all two season of them now, is there? I’m just a little bit pleased that there’s no more than two since I’m waaaay behind on Breaking Bad and I have to avoid all literature on it just so I don’t accidentally spoil my own fun. 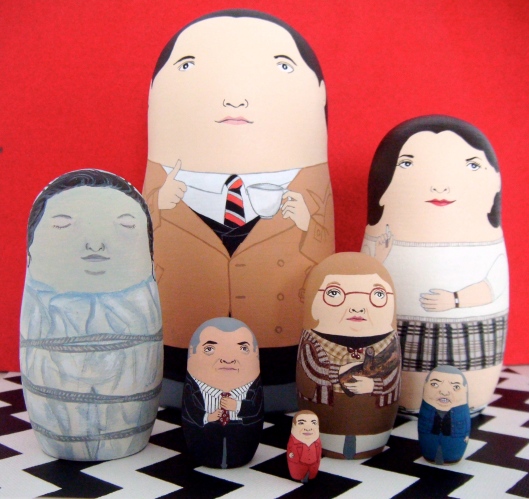 Coming down from easily one of my favorite projects to date (which you’ll see come Halloween), this is a close second. One morning, when asked what I would be doing that day, I said, “I’m painting a corpse and a lady holding a log.” 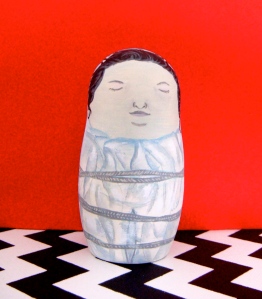 The Log Lady, my favorite character because she reminds me so much of a weird neighbor I had once. 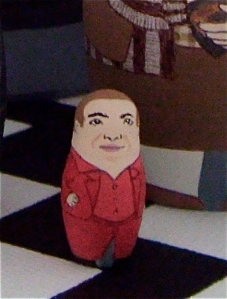 Last but not least, the dancing dwarf.

I was also asked to paint a little carpet for the set, which was something I’ve always wanted to do but never did get around to. The scenery always seems to make the dolls come alive, doesn’t it? (And also mask the fact that I take terrible photos).

Here’s a little treat for those of you who enjoyed this show:

I totally believe that when the Great Organizer of the Universe hands you a once-in-a-lifetime opportunity, you better grab it and run with it. That’s exactly what my friend and former colleague Dan Zalkus did when Glenfiddich came a-knockin’. He was an artist in residence at the Glenfiddich Distillery in Scotland for a few months, doing nothing but knocking back endless shots of whiskeys and drawing. The fruits of his labor resulted in a show at the distillery AND a wonderful picture book of the daily going ons there.

Flipping through this book reminds me of my own trips to Scotland oh so many years ago. Although I’m not a strict whiskey drinker, I do recall ordering a number of them there since my coat wasn’t doing sufficient enough a job keeping me warm while looking for the wee Nessie at Inverness. 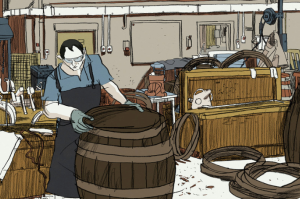 Dan’s able to capture the movements of the distillery workers with his impeccable style by showing up every day with his charcoal pencil and drawing board. It’s not a bad way to spend three months of your life, is it?

When I got his book in the mail, it went right up in a place of honor…right next to our very own Glenfiddich bottle! This is one book that should not be shelved!

I’d originally planned on debuting this set around Halloween, but there’s another one in the works that I feel might be more apt. So here’s one of a creep fest fave of mine: The Strangers.

I chose to paint only the bad guys: Man in the Mask, Doll Face, and Pin-Up Girl.

The first time I saw this was late at night and on my own. I don’t get creeped out by horror movies often, but this one did the job. It’s extra scary for me because the very next day, and I swear I’m not making this up, I was on the couch reading and this girl just wandered into the house. It was all very innocent, but the fact that she just walked right in while I was still processing the fact that The Strangers was based on true events shook me up a little. I’ve started to latch the door after that incident but of course, with that house being the way it was while we were living there, there were other means of getting inside unassisted by a key.

With all the Sherlock Holmes based shows out these days, which do you prefer?

This is the BBC version featuring that guy Benedict Cumberbatch (who is absolutely in everything these days, according to my Entertainment Weekly). 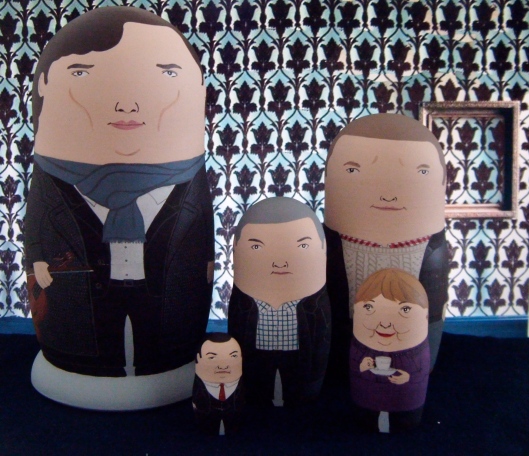 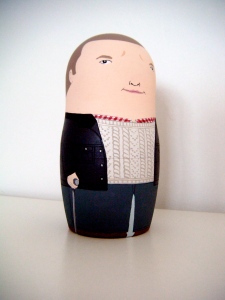 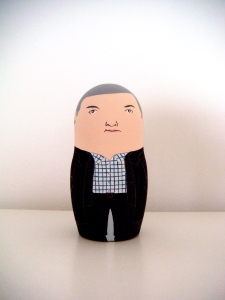 The mini Mycroft doll absolutely cracks me up!

There are some exciting things happening. First of all, I’ve got some fun things planned for my annual Halloween dolls. Second, since I’ve eased sugar back into my diet again, I’ve gone hog wild with my birthday cake this year…well, it’s not so much a cake as it was a brownie, but a pink rainbow one, though. 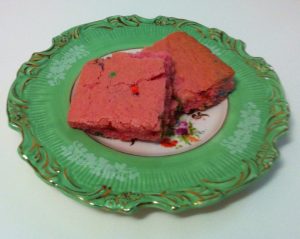 There were raised eyebrows here and there over this choice, but it’s my birthday and I’ll have my pink brownies if I want to.

My new sweatshop is finally up and running! Since this new room has an enormous closet, I can finally put all my supplies and books in its proper place instead of having it look like it’s exploding out of every surface. 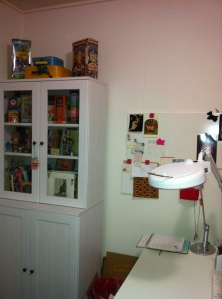 Since I usually have about 10 project going on at once, it won’t be long before things start to pile up.