This year’s holiday set ran a bit dark, more or less to match the mood I would be in if I’m ensconced in a cloak of wintery darkness. But it’s really hard to feel blue on the sunny Gold Coast so I decided to paint the lighter version of the most famous Dickens’ classic: “Scrooged.”

When I was asked to paint the Seinfeld set, it evoked a bunch of great memories. The buyer and I ended up exchanging dozens of emails as we threw ideas back and fourth and talked about some of the best scenes. It wasn’t easy narrowing down the choices, but I think we did this set justice.

A few years before Seinfeld went on air, I saw Jason Alexander (aka George Costanza) on the Broadway stage performing in “Jerome Robbins’ Broadway) where he played the emcee and an assortment of various characters. The man can certainly sing and dance. No one believed me when I revealed that talent of his. Same thing when I pointed out to the hubs that I saw Mandy Patinkin as Uncle Archie in “The Secret Garden” musical. Oh, and that he was in “Yentl” (although he wasn’t given the opportunity to express himself musically in it).

But back to Seinfeld… 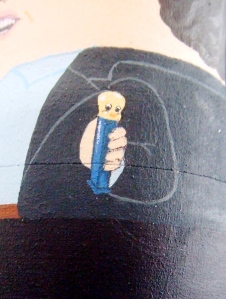 The first episode I’ve ever seen was the one with the Pez dispenser so I talked my way into painting Tweety.

The buyer and I were on the same page with the Kramer Painting and the lobster shirt. 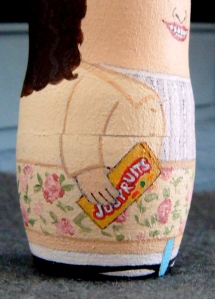 Elaine cannot be the only person to choose lollies over boyfriends. I’ve been known to cancel on dates so I wouldn’t miss a TV show. This was before DVR, mind you. 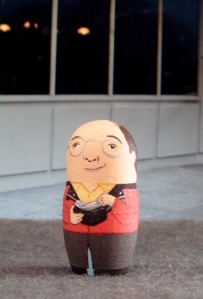 George and his wallet stuffed with papers pre-explosion. 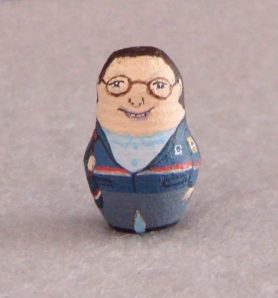 I had to rummage through my stash of mini last dolls for a rolly polly one because the original one that came in the set was, well, too thin, to represent Newman properly.

This is definitely one of those sets I don’t get to do enough of. Flight of the Conchords in its third incarnation, and this time I get to paint the videotape editing console guitar for Jemaine as depicted in their video of “Carol Brown” and a video mixing console bass for Bret.

What nutty boys! In this new edition Murray is holding up a picture of the boys, Dave has a new T-shirt on, but Mel is still holding the painting she did of Jemaine and Bret in front of a red skied landscape. That one’s a classic. You don’t mess with a classic. 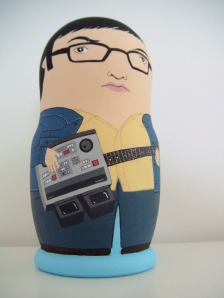 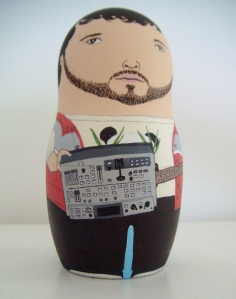