I was toying with the idea of painting yet another set of The Addams Family for Halloween this year, but this time with the adorable Cousin Itt. But someone presented me with the idea to bring the cast of Stanley Kubrick’s “The Shining” to life, I said, “Let’s do it!” 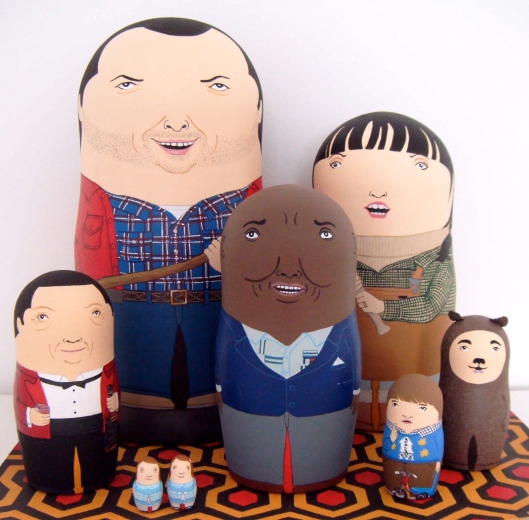 For an entire week my workroom was all things Stephen King. I listened to the audio book version, watched the film twice, and even managed to get my hands on the TV miniseries version too!

We threw a few ideas around and decided that the famous modular carpet pattern is almost a character itself since it’s so iconic. I painted a small version of it (almost freehand since rulers and I are not exactly the best of friends). It’s almost like the ninth doll here! 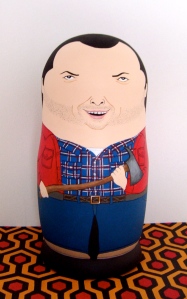 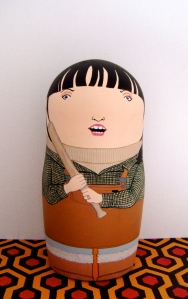 The very jittery Wendy. Well, you would be too if you’re trapped in the middle of nowhere with Jack Nicholson. 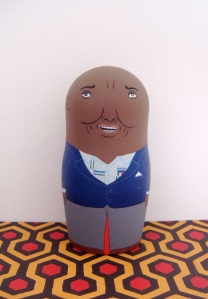 My favorite psychic of all time, Dick Hallorann. 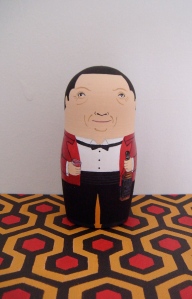 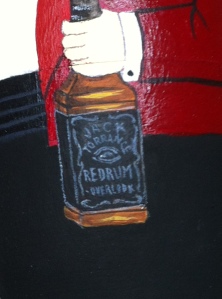 As a joke, I swapped the Jack Daniel’s whiskey label around to accommodate the subject at hand. I was trying to paint a mini version of the Overlook hotel in there, but that didn’t work out too well. 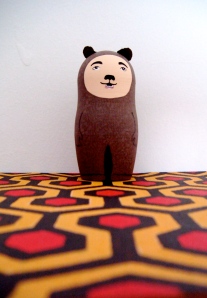 The Party Bear, one of the phantom guests at the Overlook Hotel masquerade. 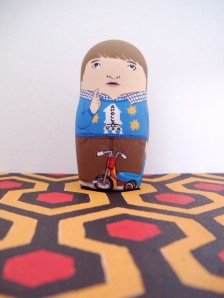 Danny Torrance, my second favorite child psychic (my first favorite will always be Caroline from Poltergeist). He’s here with his imaginary friend Tony. 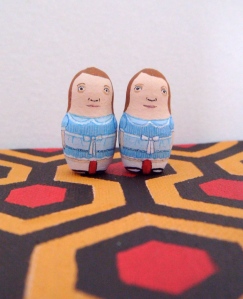 We also kicked around the idea on how to represent the ghostly twin girls until I found another little doll to fit inside the one before it. It’s a bit untraditional, but then again, nothing I paint is remotely traditional.

Well, I hope you and yours are enjoying yet another Halloween. If you’re too old to go trick or treating, why not sit yourself down to a horror film or two? I highly recommend The Shining.

I was teaching third grade at the height of the Harry Potter madness so I can’t help but be more than a little bit familiar with it. There’s no need to explain anything to me when it comes to anything in the wizard/witches world, not when I used to get detailed essays about Hogwarts and its students and faculty for composition writing class, carefully rendered maps of the magical world for art, musicals about it for drama, and chapters read out loud during read-aloud time.

Now, years later, I was asked why I never painted this set. Could it be because I knew the story too well and didn’t think I could do it justice? So it was up to a few fans of the series to tell me exactly what they wanted and I hope I did do it justice! 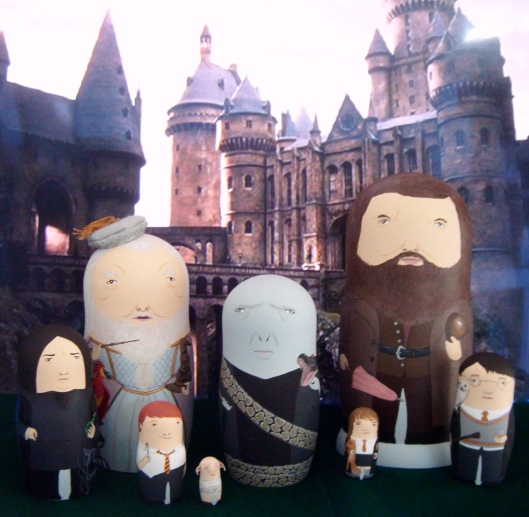 This large set of 8 features some but not all the important Harry Potter characters (clockwise from left): Snape, Dumbledore, Voldemort, Hagrid, Harry, Hermione, Dobby, and Ron Weasley. 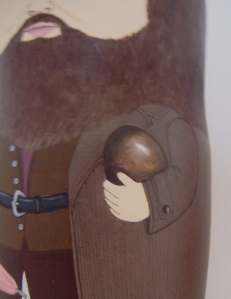 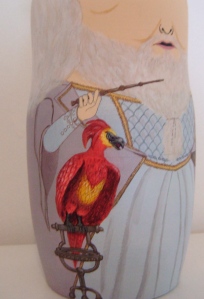 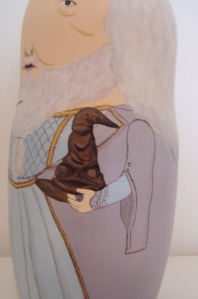 …and the sorting hat.

Snape and Voldemort with… 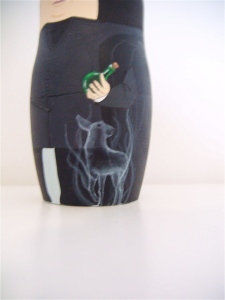 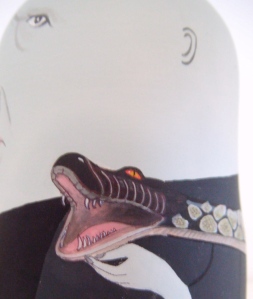 the doe petronus and Nagini. 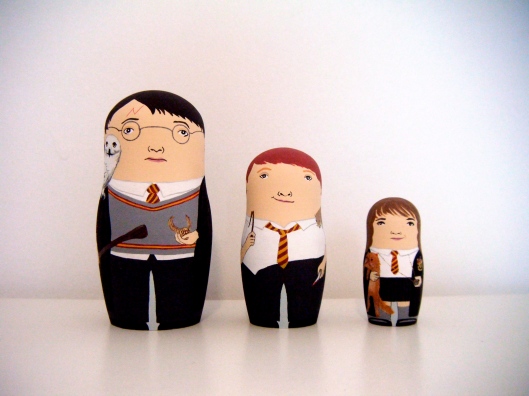 Harry, Ron and Hermione with… 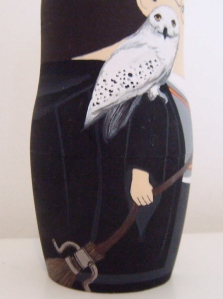 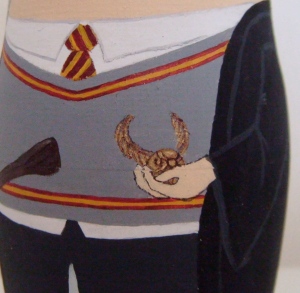 …and the golden snitch. 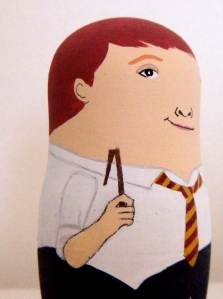 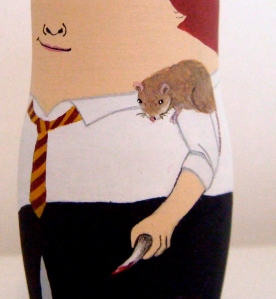 Ron, his broken wand, the basilisk fang, and of course, Scabbers before they realized he was Pettigrew. 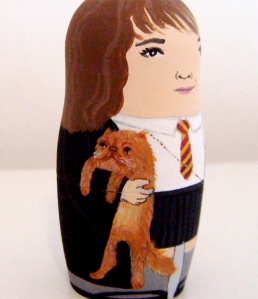 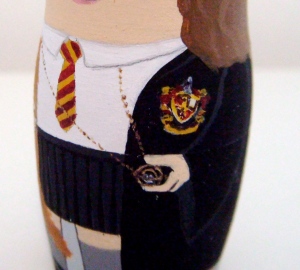 And last but not least… 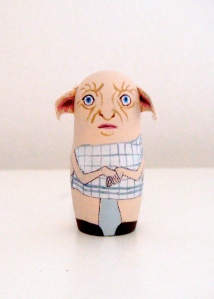 You know what’s so awesome about Chinese weddings? The brides get to live their princess at the ball dreams and choose a bevy of pastel-colored poofy gowns where ruffles and hoops reign supreme. I often wondered, if the Hubs and I were to conduct our nuptials in my motherland, would I be swept up in visions of pastels and satins and spend the majority of my reception trying to get myself in and out of a sea of taffeta? Most definitely! Not!

But this custom does give me plenty of opportunity to switch things up when it comes to painting the likenesses of the bride in her myriad gowns on the dolls. Oh, and the groom too. 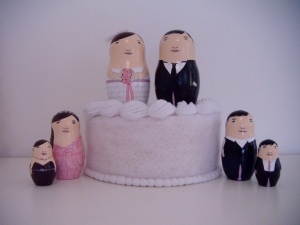