Nori, Mochi and Natto are gearing up for the third of the five Battles of Kawanakajima re-enactment. Their samurai armors are buffed to perfection and they all have their onigiri (lovingly made by their wives) tucked into their pockets for lunch.

Playing the role of Takeda Shingen, Nori is ready to capture the katsurayana fortress with his army! 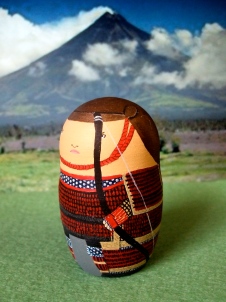 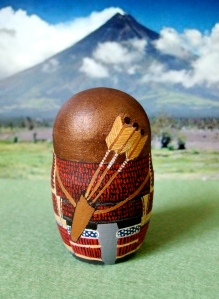 She’s done it! Ms. Jean-It has finally gone under the needle and got a full sleeve done on her left arm. She was the inspiration for “Ink’d.”

It’s rather shocking and flattering to see my artwork etched into someone’s skin.

So proud of you, gurrl!

Even the best of children can be ornery now and then. 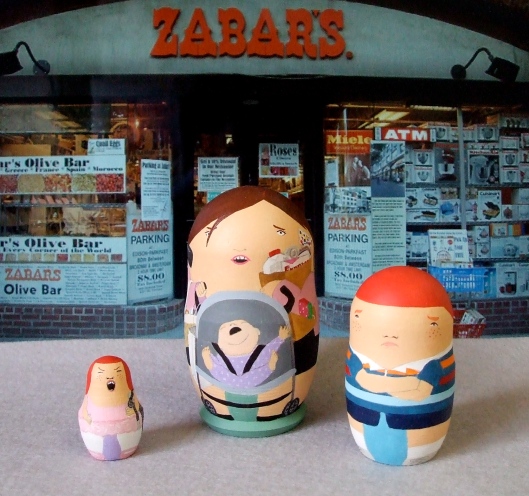 Hopefully some Frankeberry cereal snack at home will sweeten these children’s dispositions right up!

With spring here and our daily viewing of “American Chopper,” my life is now inundated with motorcycles and that’s given me an itch to paint yet another set of bikers. 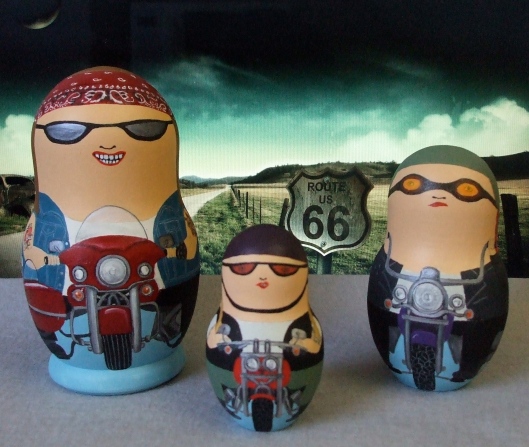 Meet the Daughters of Beelzebub, the all-girl bike gang who roams through lonely highways and are always up for a good bar brawl. 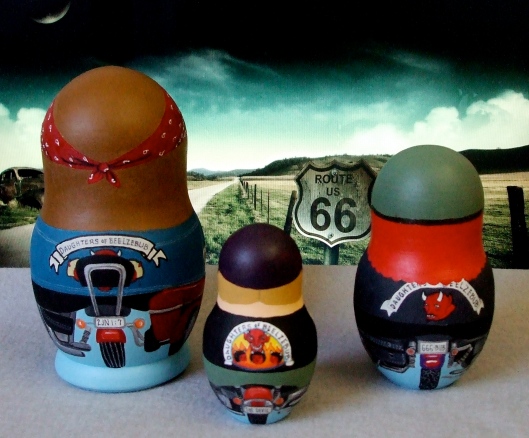 I love the idea of sidecar (not the cocktail, mind you…it tastes like solvent with a twist of lemon). And of course, the occupant HAD to be a bulldog, whom I’ve modeled after my brother’s auxiliary bulldog, Yama. The tattoo (right) is in honor of my Bully, who left us much too early. 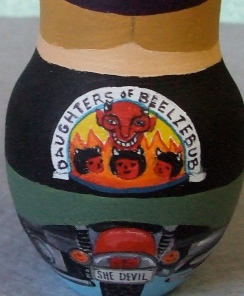 The girls are keen to showcase their gang logo on the backs of their jackets and vests. 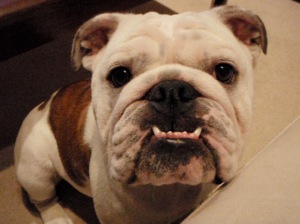 Painting such highly detailed work could’ve given me a sever case of voluntary Torette’s, but I found that if I only paint, say, two wheels and part of a helmet a day, it was quite Zen.

Are Woolly Mammoths, Pygmy Hippos, Pterodactyls, and Dodo Birds really extinct? Apparently they’re all still around and getting ready to celebrate the birth of a brand new Gigantspinosaurus.

(Clockwise from left) Sherrie and Mimi, the Pygmy Hippo; Gregory and Wooster, the Woolly Mammoth; Neal and Nestor, the Pterodactyl; Stevie and Barry, the Gigantspinosaurus, still in his shell; Catherine and Trixie, the Dodo, who’s having a go at the birthday cake. 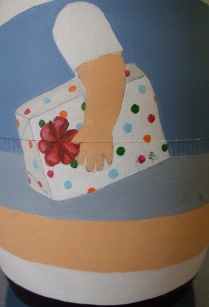 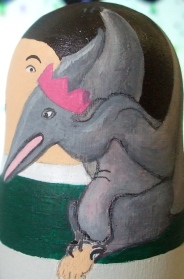 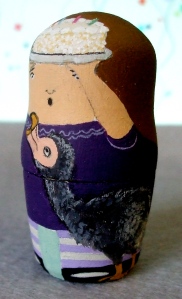 Sam, Gertie, and Bobby are always happy on Show and Tell days. This means they can bring their favorite pets to school and wow everybody!

Here’s Sam and Digby the ostrich. It’ll be a while before Sam can find a rain jacket for Digby, but in the meanwhile, he’ll have to make-do with just a pair of boots and a rain hat.

Bobby is best friends with Gunther the gorilla. Gunther has a tricycle of his own, but he prefers to be chauffeured around so he can take in the scenery.

Gertie just loves Octavio, her pet octopus. She worries about the day when he gets too big and has to go and live in the ocean. But in the meanwhile, he’s happy swimming around in the kiddie pool in the back yard. 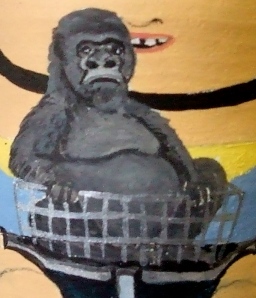 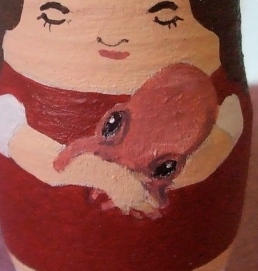 For one insane moment in my life, I’d actually contemplated on quitting my job and getting a degree in cryptozoology, which is a study of “hidden” animals. This idea came about after watching Werner Herzog’s “Incident at Loch Ness.” I’d get to travel the world looking for Big Foot and Monster Sea Serpents and fiddling with high-end sonar-related equipment. And then I watched “Boggy Creek II: And the Legend Continues” —Mystery Science Theater 3000-style—and changed my mind. If being a cryptozoologist means having to wear short shorts, tube socks, and hanging out in a van all day with the dean’s son who whips off his shirt at an alarmingly frequency just to track a monster, I’ll cheerfully leave that to someone else.

But that doesn’t mean I can’t paint a few cryptids, right? 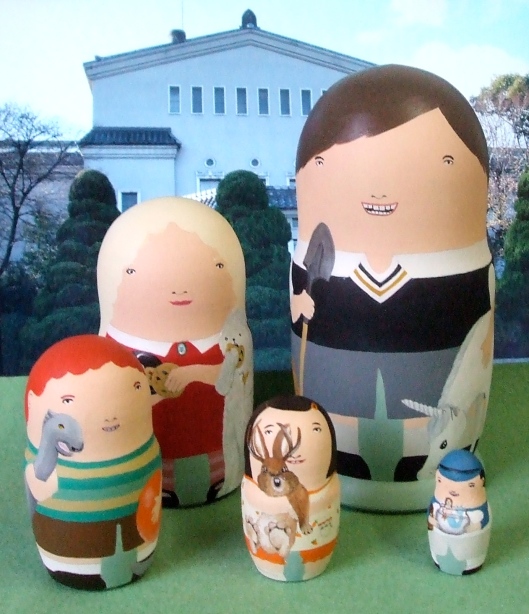 Here we have a few kids entrusted with the care of these mythical creatures at the National Society of Cryptozoology. Their daily chores includes playing with the animals, documenting their habits, behaviors and bowel movements and making sure that they are, above all, happy.

Cecil hangs out at a nearby farm with his unicorn, Cornelius.

Cornelius sustains on a healthy diet of hay and apples. His horn also requires daily polishing.

Ursula and her parents went to Tibet and brought back the little orphaned Yeti, whom they’ve named Yancy.

Ursula and Yancy shared a common love for cookies embedded with M&Ms. (Left: a close up of Ursula’s brooch, which depicts the tree where she found Yancy.)

Angus was the first person the find and befriend the Loch Ness Monster, Ian, whose disposition was not as monstrous as his moniker led everyone to believe.

Angus and Ian love a rousing game of kick ball! 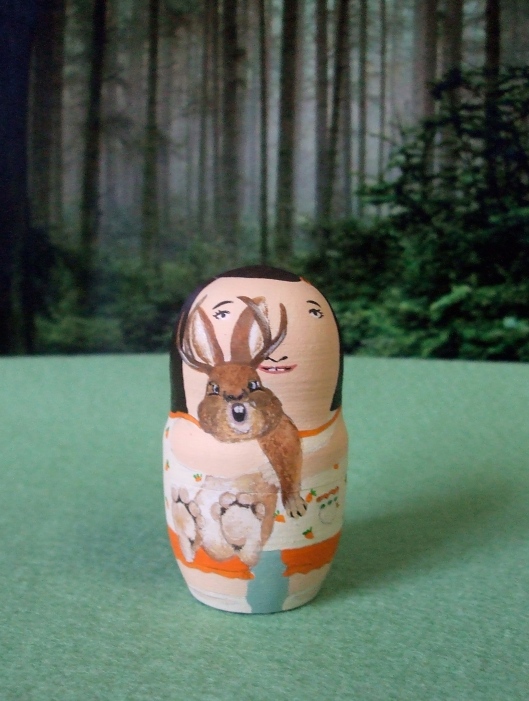 The only reason why Natasha was able to nab the super quick jackalope was because of her uncanny ability to speak rabbit. That, and the fact that she reeked mildly of carrot soup. She and Aunt Benny got along well, although Aunt Benny’s interest in Natasha usually wanes after discovering all the carrots in her pockets were gone.

Billy was playing ball by the pond in the park when he accidentally beamed Hortensia, the mermaid who lived among the lily pads. In order to help her convalesce, Billy transferred his goldfish into his mother’s salad bowl so Hortensia could take up temporary residence. Even though she’s feeling much better now and had since moved back home, Hortensia still asked Billy to take her out to see the world now and then—the Paramus Mall being her favorite spot. 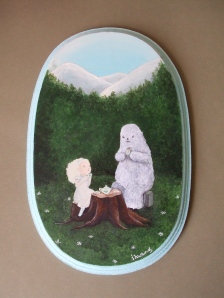 …which was inspired by The Beastie Boys’ “Triple Trouble!”

Who would you rather show up on your doorstep?

Since the month of Halloween always unleashes my inner goth chick, I attack this set of dolls with most macabre of enthusiasm.

The ring bearer is holding a ring that’s still attached to a severed finger.

This was actually painted way back in July. I was in a Halloween frame of mind at the time and just couldn’t resist.

The best about this set was making the little witchy hat!