These three gals from the Harajuku-Zoku (Harajuku tribe) are ready to wreak havoc once again!

They are the experts of mismatched fashion!

It’s wedding season around here! While I am busy sewing the trousseau for my impending nuptials, I’m asked to paint a set of wedding dolls (and their future progeny).

While the bride is resplendent and ravishing, I totally dig the groom’s choice of neck wear. 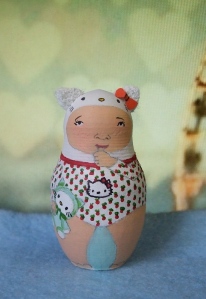 The happy couple is hoping for an addition too, although I doubt they’re seriously going to turn it into a Harajuku baby.

This project is a good practice for when I paint my own set of wedding cake topper matryoshka. Unlike this set, though, I will have to also fashion a kayak out of Fimo as well.

My bulldog Bo was having his dinner one night and spat something out between gulps. Turned out it was his baby tooth. I was only too happy to retrieve it because there’s nothing quite as fascinating to me as teeth. 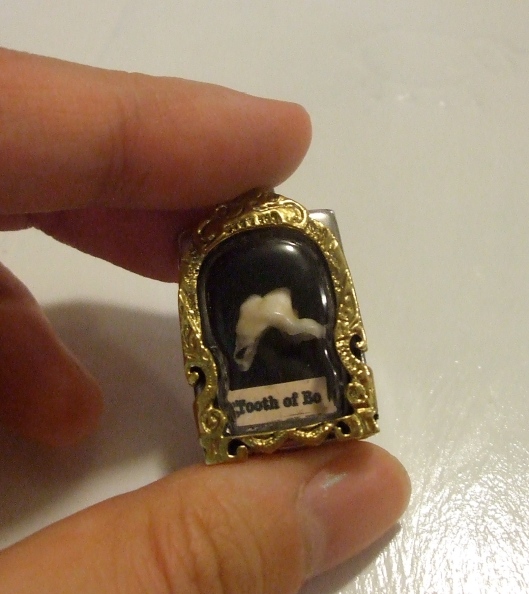 I recently got my little hands on a bunch of “diorama lockets.” These things are great. They’re wide enough for you to plaster not only photographs but little bits of trinkets. Finally, I have something to display Bo’s baby tooth in!

It’s a little early to be bringing out Christmas themed items, but ever since my stint working as a display designer at Kate’s Paperie, I’ve been conditioned to start thinking about Christmas in August.

Here is Mother Ginger, one of my favorite characters from the Nutcracker Ballet. 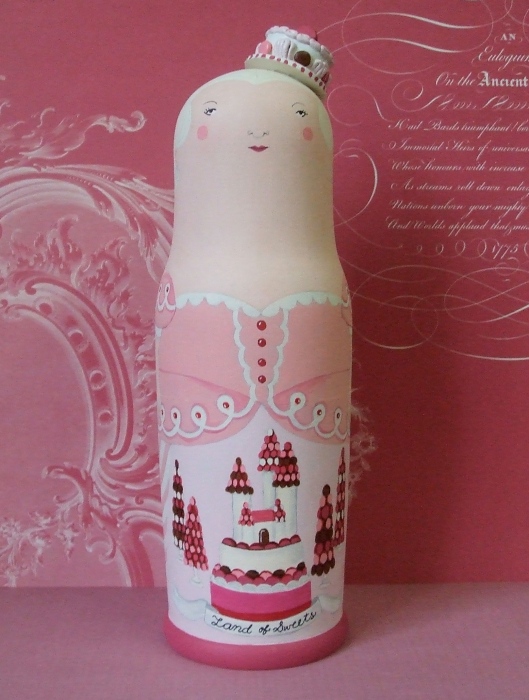 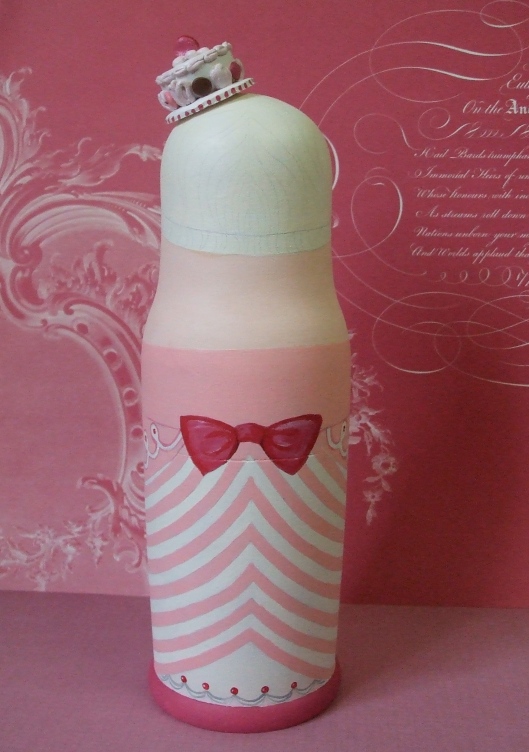 She is a bottle holder doll, and, just like the real Mother Ginger… 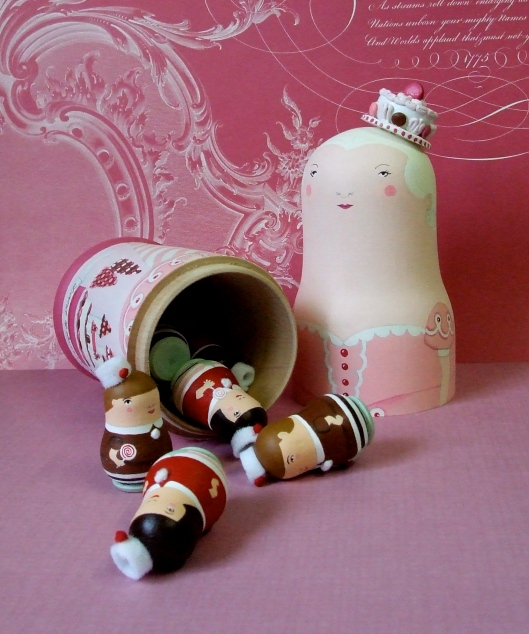 …the little Bon Bons come out of her skirt!

I could’ve cheated and bought a Re-ment cake and use it as Mother Ginger’s hat, but I figured I would have more fun making a macaron cake out of Fimo.

There aren’t many shows out there like “Flight of the Conchords,” the fourth most popular folk parody duo in New Zealand!

After much contemplation, I’ve decided to make this set a “double trio.”

This way, both Bret and Jemaine can be the same height…and I got to include some of the best supporting cast on television to date.

Murray posing in front of the New Zealand Consulate.

Murray is overly officious, which is evident in the way he insists on taking attendance at every band meeting. 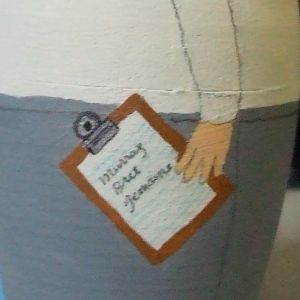 Devjeet “Dave” Mohumbhai (played by Arj Barker), Bret and Jemaine’s friend who still lives with his parents but claims they’re his crazy roommates. 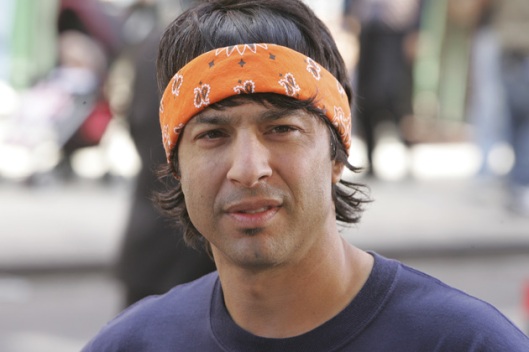 Dave posing in front of his family’s pawn shop.

Mel, the band’s lone fan/stalker. Oh, god! They couldn’t have gotten anyone better than Kristen Schaal, who makes utter creepiness unbelievably cute, to play her.

As a hardcore Conchord fan, I just had to include that inappropriate “fan art” Mel has created. 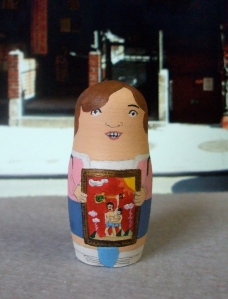 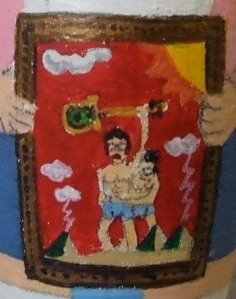 In the episode “The Tough Brets,” Mel gave Jemaine a painting, which he tried to throw out. He claimed that Bret’s jealous of it, so Mel rectified the situation by adding Bret into the scene. 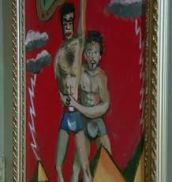 Even though the reproduction I did is miniscule and you can’t really appreciate the boys’ physique on such a tiny scale, I had a great time painting it!

Doug (played by David Costabile), Mel’s former psychology professor and now husband. Even though his role in the show is limited to scenes where he drives Mel to a band gig or on a stalking mission, I want to include him in the set, as his presence always adds a little levity. 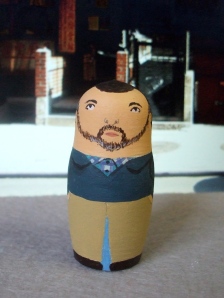 And here are the Conchords themselves: 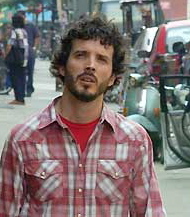 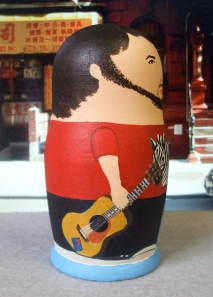 …and who can forget his collection of animal shirts? 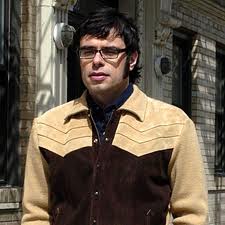 The cast of Flight of the Conchords (posing in front of Bret and Jemaine’s apartment).

It’s such a shame that this most excellent show is canceled. I used to see the film crew setting up for exterior shots when I worked at the Lower East Side and that would simply brighten my day. Now, whenever I get a little homesick, I pop in the DVD and see the boys singing and dancing all over my old stomping grounds. You rock, Bret and Jermaine!

On a brighter note, I found a picture of Bret, who, like most New Zealanders, was featured in The Lord of the Rings trilogy.

He had a line and everything!

I couldn’t help myself! I love cupcakes and I love glitter! I recently got my little hands on several bottles of Martha Stewart’s glitter and after much deliberation, I decided to combine my two passions!

These gals competing for the Little Miss Cupcake Pageant have done it again! It’s obvious that Miss Mango Parfait Cupcake is the front runner from the beginning. You can’t miss her cupcake…nor her outrageously orange gown from the start. Is it any wonder she got the coveted Cupcake Trophy?

But the two runner ups: Miss Key Lime Cupcake and Miss Cherry Chocolate Cupcake, are nothing to sneeze at either. Although they haven’t got the top honor, the loss will be sure to send them back into the kitchen, bettering their cupcake recipes for the next pageant!