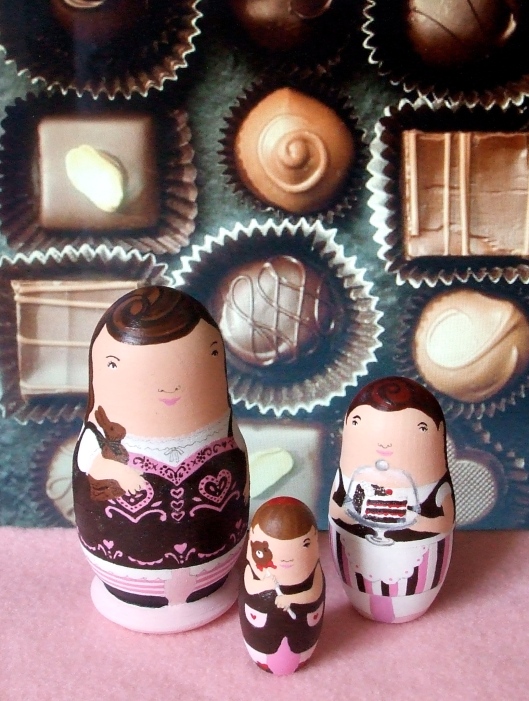 There’s more to life than chocolate…but not right now.

Simply put…everyone has a price. Mine is chocolate!

I’m crazy about gnomes. I’ve sat through Disney’s “Gnome Mobile” not once but twice; I actually own Mystery Science Theater 3000’s “Mr. B Natural,” a short about an androgynous musical gnome who helped an adolescent boy named Buzz find the gift of music.  I’ve shelled out extra shipping charges for an obscure but delectable Gnome Swatch Watch (which came housed in an adorable toadstool); I had all of Rien Poortvliet’s Gnome books…That’s why it’s a bit of a surprise to me that it took this long to come up with a set of my favorite little woodland people.

This set came with only a large toadstool and three little ones. By luck I found a few unpainted mini babushka dolls in my collection of unpainted dolls. There’s always room for add-on’s! 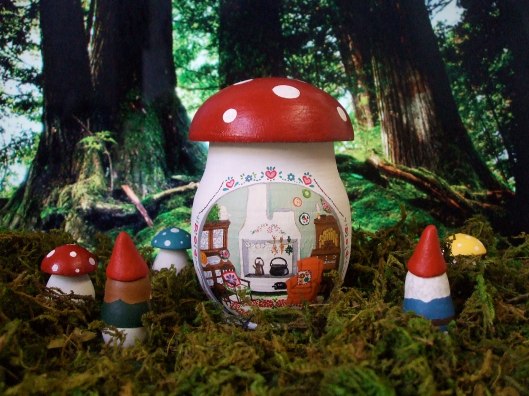 The “invisible wall” gives you a glimpse into their little world. 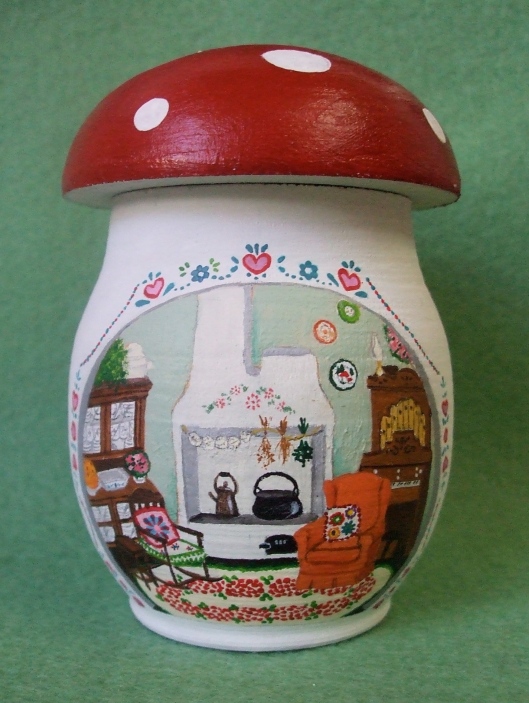 I wouldn’t mind a little pipe organ in my sitting room either! 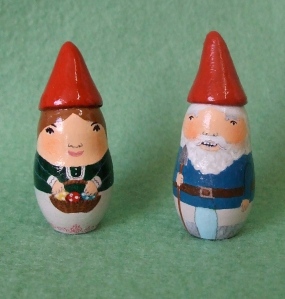 Mr. and Mrs. Gnome were especially fun to create…it might have something to do with making their little hats!

These new practical faeries are here to make your life a little more pleasant!

Introducing the Sing Your Heart Out Faery. Even if you can’t carry a tune or are completely tone deaf, she’ll still help you to sing from deep within.

The Nitey Nite Faery will help you sleep a little better at night, even if your bedroom happens to be right next to the railroad tracks. 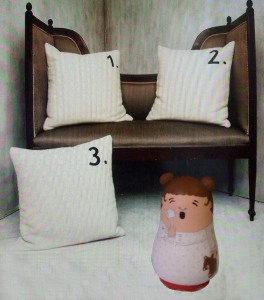 And here’s the Good Hair Faery, for all those mornings when your hair is completely hopeless. Her philosophy is: When in doubt, beehive it! 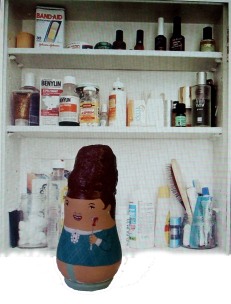 Every time I do my washing I’d wish for a helper monkey…so here’s my Helping Hands Faery. A wave of his wand and the house hold chores will cease to be. But that is only if you can find him first! 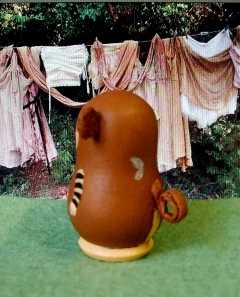 The Wake Up! Faery sure isn’t going to let you sleep in! Not when he’s armed with a cup of aromatic coffee and a voice that’ll rouse even the dead! 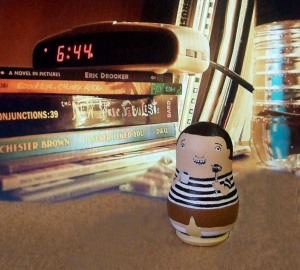 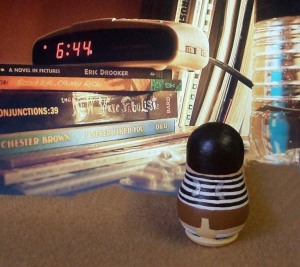 As a kid, I used to adore puppets…to a point that I believed they were real. Hand puppets were a particular favorite of mine…so much that my students, back when I was still teaching, had to suffer through a mandatory unit of puppet-making every year. But the puppets held such magic onto themselves that even the surliest of teenagers filed no complaints when I announced those inevitable words: “It’s puppet time!”

Here’s Pat with his ventriloquist puppet Schlomo, attempting the ever-popular drink-a-glass-of-water-while-the-puppet-sing trick; Betsy with her handmade Viking marionette; and Gage with his beloved Punch and Judy hand puppets. 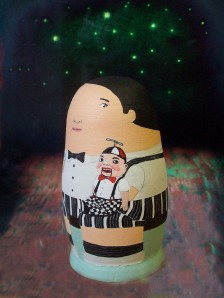 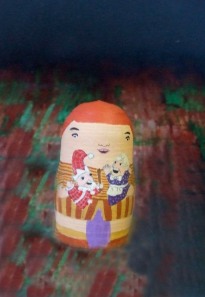 One of these days, if the timing is right, I would love to be in the center of a Puppetry Festival. But until then, I’ll keep on painting them!

Anthony and I often discuss where in the world we would like to go to for our eventual honeymoon. We both have very different ideas. I love the cold, so my dream vacation is Hammerfest, Norway, from December to February so I can see the Northern Lights at its awesomest. Anthony vehemently disagrees with this notion since he can’t tolerate any kind of weather below 70F. He’s not opposed to kayaking and camping around some obscure islands, but I’m not too thrilled with the notion of wearing sand to bed and having to dig out my own latrine first thing in the morning. The only compromise (so far) is an African safari. I’ve only been to the Northern regions and would love to check out the safari on my next go. These conversations has inspired the “Maasai Madams.”

One of my favorite cartoons show is “The Wild Thornberrys.” I love how the characters are placed in different parts of the world in every episode so the Dad can make documentaries of the flora and fauna in the area. Variety is always welcomed in my world. I always enjoy the episodes when the family are in Africa. One of my favorite is when Eliza visits what she thought is a backward Maasai tribe only to find that they speak English and have internet access in their huts.

Wait! What is that peeking out of the back of the doll on the left?

Why, it’s a little Maasai baby!

One night only at the Moulin Rouge:

The Maneki Neko (Beckoning Cat) could be seen in many Asian retail establishments. It’s meant to bring in customers and good fortune. The more desperate the retailers are for business, the more ornate the cat. I had a friend who was forced to share her tiny counter space at a restaurant with a 25″ Maneki Neko, completely done up in gold.

Come one, come all! To LuLu’s circus! 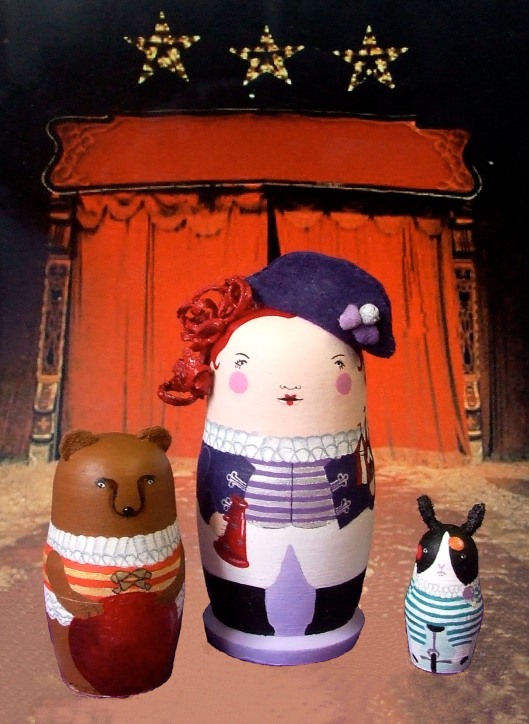 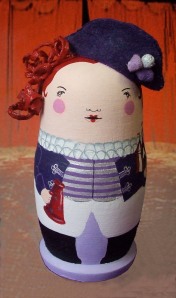 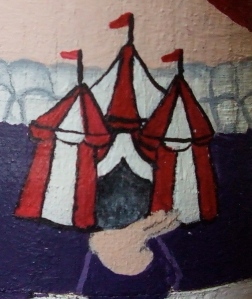 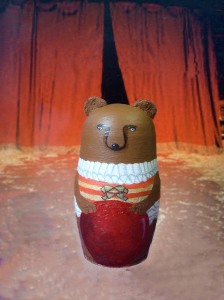 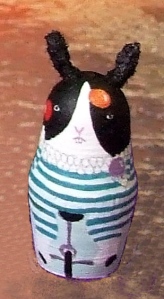 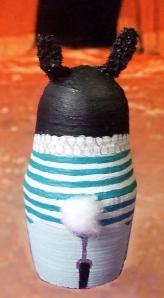 And Linus the Juggling Rabbit!

A turn in time takes us back to the Summer of Love, where we meet these three musicians who are all about love, peace, happiness, and grooving to good tunes. 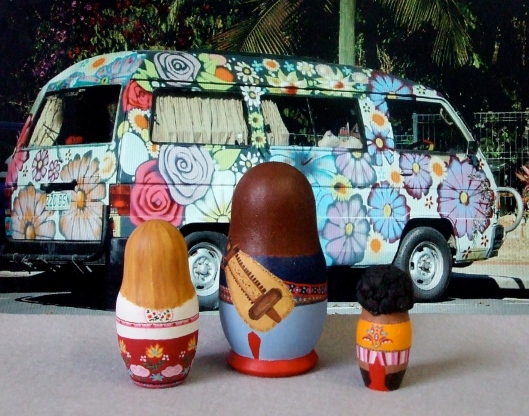 Even though they are busy rocking out to Strawberry Alarm Clock and sharing good vibes, they still take time out of their busy schedule to make tofu burgers and pass along the message of love and peace by participating in some protests and sit-ins.

I’m not going to tell you what W.D.W.Y.F.W stand for because it’s a bit rude.

Instead of painting the obligatory guitars often associated with hippies, I opted for the more obscure hurdy gurdy, an instrument I took up once out of simple curiosity. It’s a fascinating instrument that originated in the Holy Lands and was eventually brought back to Europe during the Crusades. My hurdy is now with my friend Wendy, who is probably getting more use out of it than I ever did.

Peace is the message, no matter what decade…or century…you’re in.

…and for utter Zen, here’s a little recipe for those enlightened few:

A small palm-full of black tea like English Breakfast or jasmine (or 6 teabags) for caffeine.

Bring 2 gallons and 1 quart of water to a boil in a stainless steel pot. When at boil, put in the cinnamon sticks, cloves, peppercorns, and ginger. The mixture will stop boiling. Keep the heat on high until it boils again and then lower the heat to a very slow rolling boil and cover the pot. Boil for 1 1/4 to 1 1/2 hours. Remove from the flame and let the tea sit for 1 1/2 hours at least, but not more than 3 hours. Strain the spices out. Bring back to boil and throw in the tea leaves. Let steep for 2 minutes. Strain the tea leaves out.

The yogi tea liquid, called “raw” yogi tea, is then mixed to taste with whole raw milk. Use a ratio of 50% tea, 50% milk, but some of you may like it stronger. After adding milk, bring the mixed tea back up to a near boil. Sweeten with honey. Use 1/3 cup honey per gallon of mixed Yogi tea. For a special touch, add 1-2 tsp of vanilla extract per gallon of mixed tea.