When I was asked to work on The Hobbit again with Smaug as the first doll, I panicked slightly. That had been a hard one to do but then I thought about how I wasn’t exactly thrilled about how the spines turned out the first time, I buckled down one weekend and allowed myself to get carried away. In order to be able to paint the dragon, one must first be the dragon. That’s my new motto, but only because dragons are known for sitting on piles of gold and I wanted to sit on a pile of cookies while I crank this set out.

This set featured three characters from The Hobbit that I hadn’t done before so I was more than pleased to have worked on it. 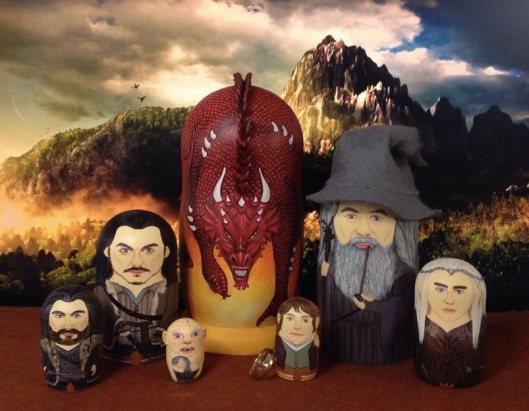 Since the set I was using had yielded an extra doll, I thought it might be a riot to remove it and stick The One Ring in as an Easter Egg surprise for the buyer. The Precioussss, of course, was most definitely not made of Elfin gold so I was half expecting it to disintegrate as soon as take it out of the packaging. It didn’t, of course, but it would most likely tarnish if it’s worn.

The buyer sent me the loveliest email after receiving it. He said the set had made him cry, and his words had made ME cry, a hardened and jaded former New Yawker who only cries in darkness after watching animal movies. I started painting these dolls during a very emotional time in my life when I had to adjust to living in a new country without any physical support from friends and family. Painting the dolls had been therapeutic and amusing, something I sorely needed then. It made me happy to learn that the photos I shared of these dolls also made other people happy, although the tears people shed after seeing them were always unexpected. I hope that’s a good thing.

My mother came home from her grocery/video rental run and handed me KiKi’s Delivery Service one day when I was home from college and told me I’d really like it. I had no reason to disbelieve her. As different as mother and I are, she knows me. “The animator is quite celebrated in Japan,” she said and left me to it. Little did I know then that Kiki’s Delivery Service was going to change my worldview completely.

The sweeping landscapes, the storytelling, the insane attention to detail made me a lifelong fan of Hayao Miyazaki and his associates. In the movie the little witch lost her inspiration and found it again when her services was needed. It was inspiring for a young artist like myself and, after I eventually got my own copy, I’d plonk it into the VCR whenever I felt a bit lost in the big wide world of illustration.

This set had been brewing in my mind for years, ever since I found out one of my good friend has named his daughter Kiki after the titular character. It was meant to be a hey-you-have-a-baby present but I felt the timing is a bit off now since the child is currently at pre-school age. Still, it’s something that needs to be done so I spent a bit of time each night working on it. I had hoped the magic had transferred from film into this set while I worked on it. It must’ve done since, weirdly enough, the main doll smelled oddly of baked bread. 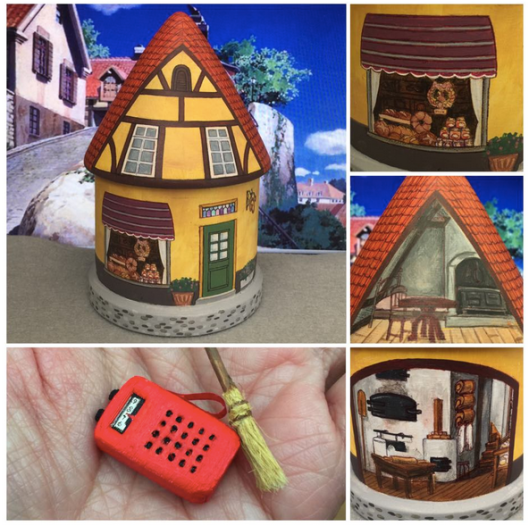 As a little “Easter Egg” surprise, I made a broomstick and a radio to pop into the JiJi doll.

As long as we’re on the subject of childhood nostalgia, this one had been rolling around in the back of my mind for a long time now, compounded by the fact that I start each work day listening to the most excellent podcast by two guys discussing the finer points of one of my favorite childhood guilty pleasures: The Baby-Sitters Club books. I didn’t like the movie or the TV series at all, but I was the right age when the first books came out and it was a real treat because the girls in the books were so relatable and most importantly, they were focused and business oriented, something my peers certainly were not. At the time I had to make a decision as to whether or not to enroll into LaGuardia High School for music or Art and Design for art, a choice I knew would dictate my future and I had no one my age to discuss this really important decision I had to make because their futures were more fluid than mine. I felt that the BSC books, especially the character of Claudia Kishi had made me realize that it was okay to know exactly what you want out of life even at the tender age of 13. Looking back, I realized I did make the right decision because, let’s face it, I’d be a pretty mediocre pianist. And unemployed.

I’ve stopped reading the books after I went to high school, which meant I didn’t know who Abby was nor did I realize that Mary Anne had a drastic makeover, or that Stacey McGill’s splashy tropical themed fashion morphed into urban sophisticate. The outfits on this set are based on the earlier versions of the girls in the series. 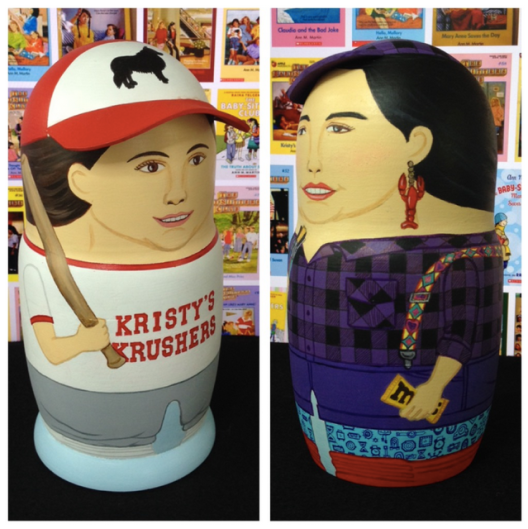 The first doll is of course Kristy Thomas the founder and president of the BSC clad in her Kristy’s Krushers uniform rather than her other notable ensemble of turtleneck, sweater and jeans. I refused to read “Kristy and the Snobs” the second time because it told the tale of the death of her dog Louie and reading it the first time made me bawl like a baby.

My nine-year old niece and I agreed that Claudia is our favorite because of her artistic skills, creative dressing style, and a penchant for junk food and mysteries. This outfit is straight out of this description from “Claudia and the Phantom Phone Calls” BSC book #2:

I’m [Claudia] wearing purple pants that stop just below my knees and are held up with suspenders, white tights with clocks on them, a purple-plaid shirt with a matching hat, my hightop sneakers, and lobster earrings. Clothes like these are my trademark. 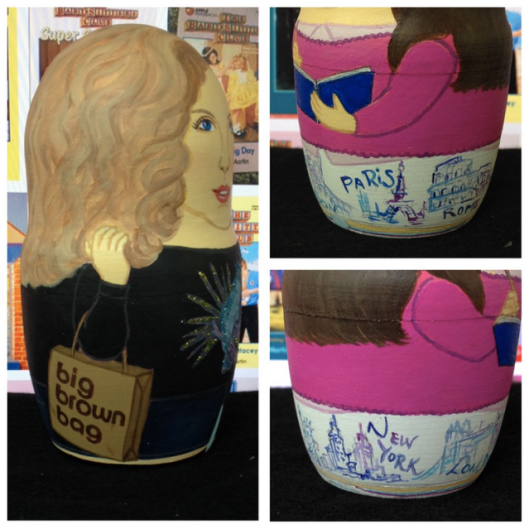 Since I stopped reading the series before Stacey’s style became sophisticated, I compromised by painting her outfit a “New York Black.” This outfit is taken from the description from “Kristy’s Great Idea” (BSC book #1)

Stacey [McGill] had on a pink sweatshirt with sequins and a large purple parrot on the front; short, tight-fitting jeans with zippers up the outsides of the legs; and pink plastic shoes.

Mary Anne’s first makeover consisted of her getting rid of her braids, but in “Logan Likes Mary Anne!” BSC book #10 she got permission to buy a new outfit for her first ever school dance with the titular Logan Bruno and this was the ensemble, with the help of Claudia the fashion maven, that was described:

Then Claudia handed me [Mary Anne] a full white skirt with the words Paris, Rome, and London, and sketchy pink and blue pictures of the Eiffel Tower, the Tower Bridge and other stuff scrawled all over it. She matched it up with a pink shirt and a baggy pink sweater. I would never, ever have tried on that skirt, but with the shirt and sweater it looked really cool. In the shoe department we found white slip-ons with pink and blue edging that matched the pink and blue in the skirt.

Dawn’s outfit as described in “Mallory and the Trouble with Twins” BSC book #21:

Dawn was wearing this cool oversized (really oversized) blue shirt. One of the coolest things about it was that it was green inside, so that when she turned the collar down and rolled the sleeves up, you could see these nice touches of green at her neck and wrists. She was wearing a green skirt – and clogs. I’d never seen a person actually wearing clogs, just photos of people in Sweden.

Jessi and I looked dull, dull, dull. We were both wearing jeans. Jessi was wearing a T-shirt that said You are looking at perfection. And she was wearing running shoes.

I threw on a pair of jeans, a sweatshirt that said I’D RATHER BE WRITING MY NOVEL, and a pair of sneakers.

This was a fun one to paint and certainly took me on a long hard stroll down my formative years. Every now and then I would catch myself wondering what had happened to these girls since we’d be roughly around the same age, but then I’d have to remind myself that they’re fictional characters.

Growing up, I thought Mary Poppins was the most magical movie I’ve ever seen. I didn’t exactly have a nanny, but I did have a baby-sitter named Ross who was in high school and had a mullet and a full beard and, upon discovering my mother used to be a piano teacher, made demo tapes of his drum solos and make her listen to it. This experience made me wish I had a magical nanny even more, especially after Ross took off on my brand new dirt bike for a test run before I even had a chance to. Looking back, he’s actually pretty awesome, but when you’re 8 and barely spoke English, you want someone like Mary to come home to after a long tough day at school with a song for every task and not an intense 20 minute drum solo on side A of a cassette tape.

Naturally, I’d want to capture a little piece of my childhood in the form of nesting dolls. Unfortunately, due to the pile and piles of projects sitting in my sweatshop at all times, I had the set boxed at the bottom of the stack for a year, then, after I got a chance to sketch it, it sat there for another year. Yet another year passed before I was able to sit down and study the hats the characters sported in Jolly Holiday and got it printed. The entire set took a shocking 3 months to paint from start to finish since I was only able to work on a tiny bit at a time. But it’s finished and tonight I will have cake to celebrate. 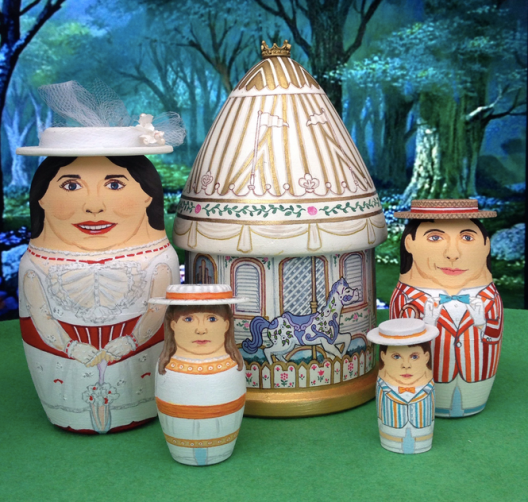 I’d thought originally that the toughest one to paint would be the carousel. It certainly took the longest, but I suppose, after a full day of painting, I daresay I was on autopilot and can’t really remember the entire process!