There is one thing wrong with using pigs to hunt for truffles…they tend to eat it once it’s discovered!

This one was inspired by my globe-trotting cousins. It’s always fun to check their Facebook status to see where they are and what they’re up to every morning. 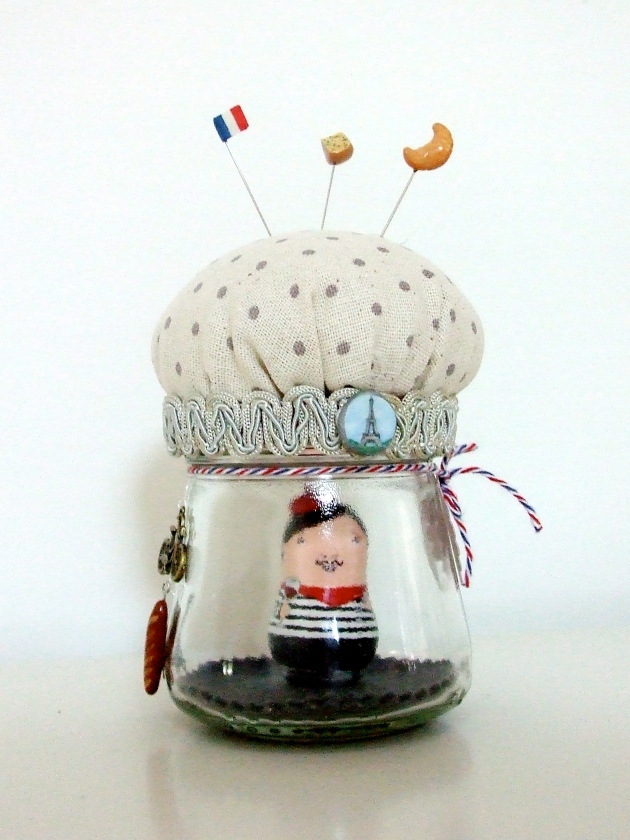 This set was fun to make, although I had to go through the seven thousand bins at the trim stall in Carrera Market to find the right shade. But the point of making these jars is to go on some kind of scavenger hunts, isn’t it?

Fun pins: A french flag, a piece of cheese and a croissant. Can’t get more French than these pins!

The way I see it, this jar could’ve gone either way: creepy or cute. I chose the latter because at the time I just heard I was going to be Auntie Ms. Irene all over again and there were visions of yellow duckies and milk bottles. 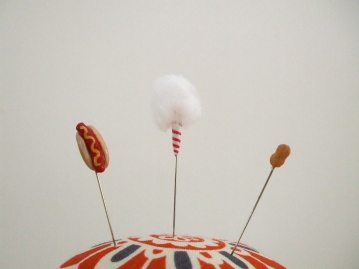 These are my favorite pins to make so far: a hot dog, a cotton candy, and a peanut!

Admittedly, the jester charm is more suited for a Renaissance Faire set than a plain ol’ carnival one, but I couldn’t find a clown anywhere!

My poor friends are often subjected to many of my whims…and Po’Trowski will be the recipient of the latest one: 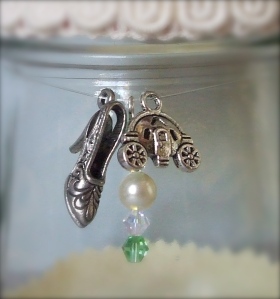 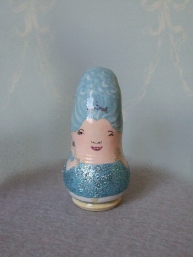 a fairy godmother with actual wings, 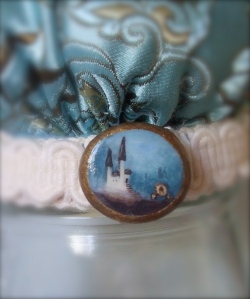 and a hand-painted button depicting the very scene where Cinderella arrived at the king’s castle!

I don’t know if the fairy godmother really does grant wishes, but so far, two of mine have come true!

The Witch in the Gingerbread House

All right, so it really isn’t a gingerbread house, but the idea is there. 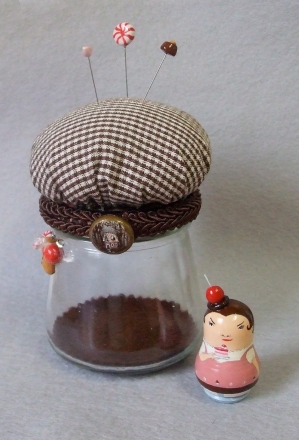 Three pin toppers: fruit slice, peppermint candy, and a chocolate treat with a pecan on top, 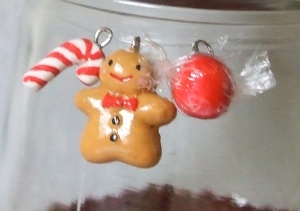 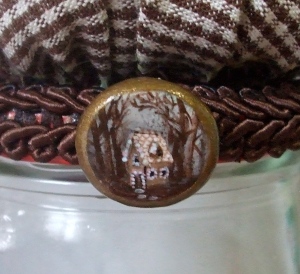 a button featuring the gingerbread house in the creepy woods,

and Miss Witch, whose enticing outfit and choice of hats (a candy apple) are designed to lure unsuspecting children into her house.

I mean, how can you resist a woman with cupcakes on the hem of her dress?

Here’s another themed sewing jar to add to my growing collection:

I recently found this fabulous orange octopus fabric and “The Little Mermaid” popped into mind. What’s even better was that I unearthed a forgotten bag of shells and corals from a past kayaking trip that is absolutely perfect for this project!

This set comes with two underwater sea critter charms and a bottled up glitter that I like to think symbolizes the voice the little mermaid had to give up in exchange for a pair of legs. 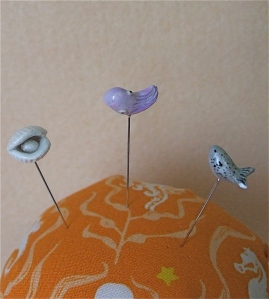 Pin toppers: Oyster with a pearl in it; a purple octopus; silver fish. These weren’t the easiest to make, but there they are. 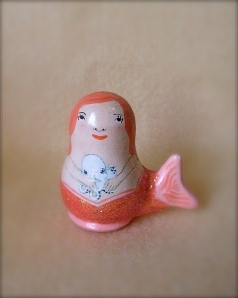 …and the Little Mermaid herself, holding onto what I like to think is an albino baby octopus. She was fun to make because I got to sculpt a little tail on her!

The problem with working on so many projects at the same time is that your space tends to shrink. I imagine that’s why my stuff is getting smaller and smaller!

Here are an assortment of decorative pins that make more statement on a pincushion than plain old generic ones. They’re a ton of fun to make, but I did need to go outside now and again to stare at the ocean for a little bit before going back to work!

A toadstool, a caterpillar on a tree stump, Victor the hedgehog.

Acorn, a ladybug on a tree stump, and grey squirrel with berry (there’s a brown squirrel with an acorn somewhere too, but alas, I lost him before I could photograph him).

A potted plant with a bug on it, a black bird, and a bunny head.

These fun pins are making their debut at The Collective Store soon! 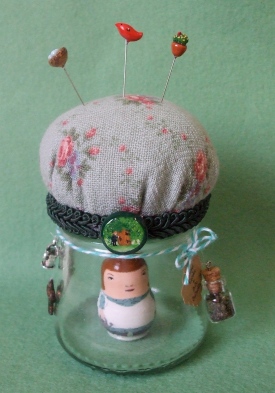 This one took the longest to assemble as I had to hunt for all the parts from various resources. I couldn’t find the perfect piece for the lid to fully symbolize Mary Lennox breaking and entering into her late aunt’s garden, so I decided to paint it myself. 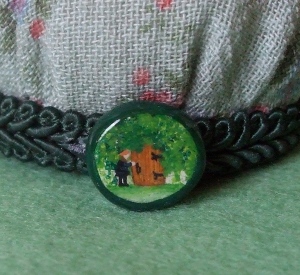 The one good thing about painting miniature scenes is that it doesn’t take very long to do one.

Pin toppers: A nest of eggs, the red robin that showed Mary where the key is, and a potted plant with a ladybug on it. 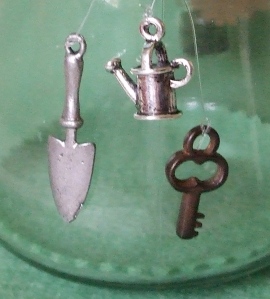 I love how nowadays, you can find a charm for absolutely anything!

There’s nothing more enchanting than a garden in a miniature bottle, is there? It’s really artificial moss, since I hate putting anything living in an enclosed space.

This project took a while to assemble, as all the bits and pieces came from all over the world. Literally! France, Australia, the US, Japan, Russia…it turned out to be the most international set I’ve ever made! 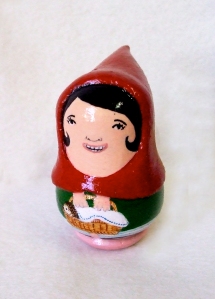 Little Red Riding Hood bead doll (but of course she’s got a hedgehog in her basket).

Red and the Wolf buttons. Yes! They’re actual buttons! And no, I didn’t make them. Woodworking is beyond my capabilities, as my 11th grade wood shop teacher never failed to remind me.

…and two decorative pins made by me…not the toadstool, but it’s so cute that I had to include it. The hedgehog is Nectar, sister of Hector from a previous set. 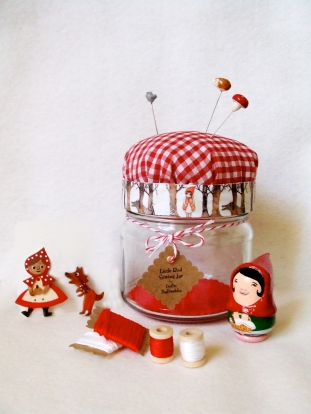 I am absolutely in love with the ribbon. Aren’t you?

I’ve got a few projects sitting around and a few of them requires sewing, which I like doing every now and then as a little break from painting. So why not combine the two? 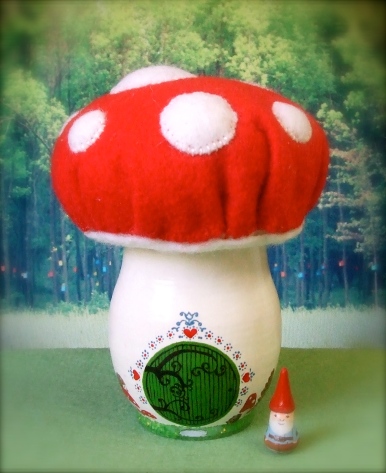 You may recognize this toadstool matryoshka from a previous entry…and a teeny custom-made gnome. The last one is no longer in my possession, so I was only too happy to paint another one.

This is how twee he is!

Instead of dolls this time, I’ve packed it with some miniature sewing notions. 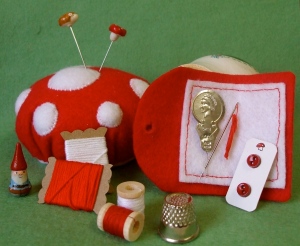 …and the top of the toadstool becomes a pincushion! 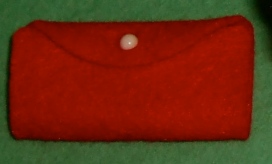 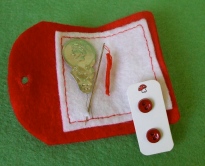 It also comes with a needle purse with a pre-threaded needle and threader.

I managed to find a lovely toadstool headpin, but couldn’t find any hedgehog ones I liked. But with a bit of polymer clay, a magnifying glass, and lots of mild cussing, here’s Hector the Hedgehog (he’s got a sister too named Nectar, who will be featured in another project).

I just cannot get enough of hedgehogs these days! It’s not fair that there aren’t any in Australia (but plenty in New Zealand, so many, in fact, that Anthony’s had a few as pets while growing up). The closest we have here are echidnas, which is really not the same, even though they’re a bit like a cross between hedgehogs and anteaters…who, by the way, CAN be housebroken…but that doesn’t mean I’m going to run out and get one, even though it might be a great solution to the ant problem in my kitchen on Cupcake Days.

An Echidna. The highlights cost extra!