Every now and then I get asked to paint a family portrait, a favorite project of mine. The thing is, being a bit on the shy side, I never dare to ask the buyers if I can paint their families in costume. I’ve done it once a long long time ago where the couple had asked me to paint them and their cats as pirates and that had been so much fun. But dreams do come true. Not only was the family I was asked to paint open to the idea of having them garbed in costumes, but in old horror movie monsters costumes! It’s a mash up of my two favorite things in the world!

Here we have the family dressed up as (Dad) The Werewolf, (Mom) Bride of Frankenstein with a real wig that I needle felted with glee, (Daughter #1) as the Dracula’s Daughter and (Daughter #2) as a Bat Baby. The family dog is a reflection of the only sane one in the lot, but if asked, I would’ve happily come up with something to put on her too!

Even though the Outlander sets are one of the more difficult ones to paint, I readily agreed to knock out another one for the annual Outlander SoCal Third Anniversary Gathering raffle. If I can’t be there in person, I might as well send one of my minions over!

This one is the most complicated one yet, largely because I was to depict Jamie and Claire in their wedding garbs, and believe you me, that was a lot of paid! Still, it was good fun and since my health issues have been resolved, I couldn’t complain!

In addition to Jamie and Claire as well as a mini version of its creator Diana Gabaldon, I got to paint Brianna and Roger for the first time in their modern costumes! 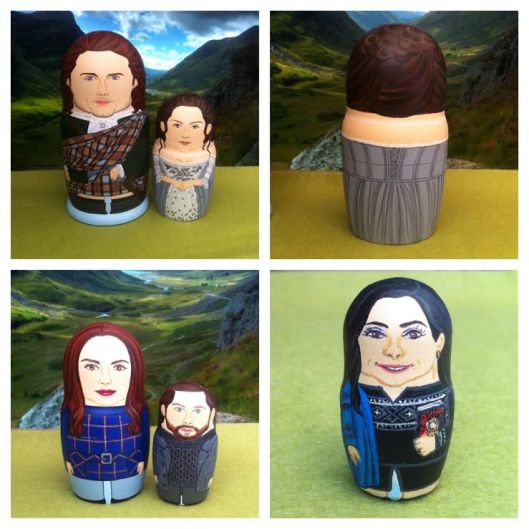 Gentlemen, step up your game, ’cause Joe’s got you all beat by a mile!

I kid, I kid! While I commend all the husbands and boyfriends (as well as girlfriends and wives for that matter—wait till you see this birthday present I’ve got cooking in the sweatshop— for coming up with all sorts of interesting and quirky ideas to gift their beloved, this one project is by far the most interesting. 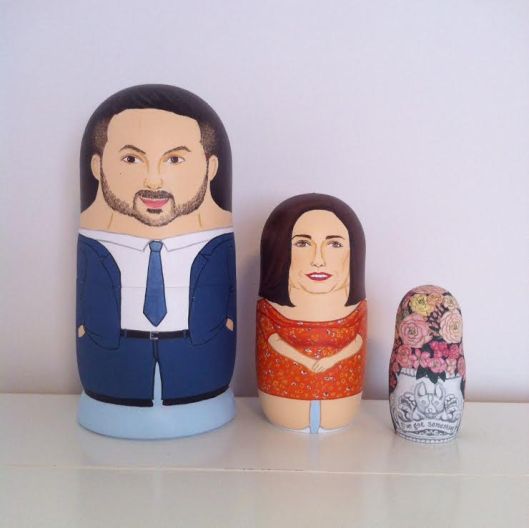 Joe is planning on proposing to his girlfriend and came to me with an idea of using a set of matryoshka dolls as a vessel for the ring. Why not? It reduces the risk of accidentally swallowing it if he had, say, put it in a glass of champagne or something, doesn’t it?

I thought about carving out a piece of foam to put into the last doll as a ring holder, but the Hubs got on his computer and designed something for it. He printed the ring holder with rubberized plastic and voila!

I used my own engagement ring as the test subject.

BoBo Babushka, conspiring with boyfriends and husbands since 2009.

This is one of those project I never thought I wanted to do until it was presented to me several months ago.

“Oh my god,” I murmured and put down my turkey sandwich. “Let’s do it,” I whispered to my email page as I stabbed out a reply with my crumb coated fingers. I was at my parents’ house when the request came so I had to do a mental assessment on my inventory. I distinctly remember having received a peculiar house set that’s larger than average which would be perfect for Frida’s home/museum and crossed my fingers, hoping I haven’t done something stupid to it like painting a lurid flower on it. As soon as I got home I headed straight into the sweatshop and it was still there, unmolested by my impulses and two months later, I got to work on it. 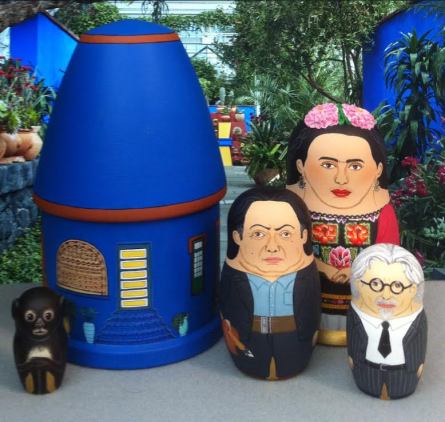 The main challenge is trying to find which aspects of the house/garden that needed to be included. After some back and fourth, we decided on this:

As I was working on this set very slowly late at night after other ones are sorted, it seemed like a really daunting project. But it got painted in the end and all I can say is that I am forever grateful to Netflix and Stan and Hulu+ for keeping me sane throughout the entire process. But honestly, it’s not as bad as I made it sound. I’ve been doing miniature interiors since forever.

Since I had once spent a great chunk of my life commuting on the subway, I often daydreamed about having an entire car devoted to my comfort.

Since there’s an extra doll left in the set, we kicked around the idea of painting one of Frida’s fetuses or a monkey. We settled on a monkey.