Before I got started on this version of Mean Girls, I had to figure out how to rig up Regina George’s spinal halo and make it removable so the dolls nestled inside her can be taken out. It’s a good thing I suffer from a mild case of hoarding so after rummaging around a bit in a huge box of abandoned bits and pieces from the time when I was really into extreme scrapbooking, I managed to cobble together the spinal halo and made it functional.

Here’s the set of Mean Girls all gussied up for their Spring Fling.

Here’s the breakdown of the spinal halo I made, which, in mid-construction, I discovered my pliers were missing AGAIN and had to have a serious talk with the Hubs about returning things to their rightful place after use. It’s really my fault because I didn’t hide my tool box. I’ve already succeeded in hiding my snacks, now I’ll just have to figure out a way to hide my tools.

I have to admit that my high school experience is vastly different from ones portrayed in film, TV and movies. First of all, I had to take the subway to school (which was why “The Princess Diaries,” the books, not the movie, jibed with me), and a bus. Second of all, my high school was located smack dab in Manhattan, but in fact so removed from all the fun parts of the greatest city in the world that it’s pretty boring. If it weren’t for the Forbidden Planet and a few movie theaters nearby, I’d probably transfer to my local high school in Queens and used the time commuting to study for my SATs. No, I’m just playing with you. I wouldn’t be studying. I’d get my own teenage gang together and wreak havoc on the streets of Flushing.

So when movies like “Mean Girls” came out, I couldn’t really relate. There were some cliques here and there in my high school, but not so distinctive that people in those cliques don’t mingle with ones outside their own. I myself bounced from group to group. There weren’t any apparent bullying either, just a bunch of really focused teenagers trying to hone their craft. It might have a lot to do with the fact that I went to an art high school with a special concentration on architecture and commercial arts. From what I gathered, these fine people I graduated with are functional members of society, most of us still pursuing our dreams of being an artist or have attained that near-impossible goal. So, “Mean Girls” is a largely fictional piece of entertainment in my book and I genuinely feel bad for people who DID have to deal with horrible people in terrible situations because I myself have been spared of such trauma. Still, I did have fun painting this version where the girls were all slutted up to go to a Halloween party except for Cady, who didn’t get the memo. And also Janis, the only voice of reason in the high school jungle. 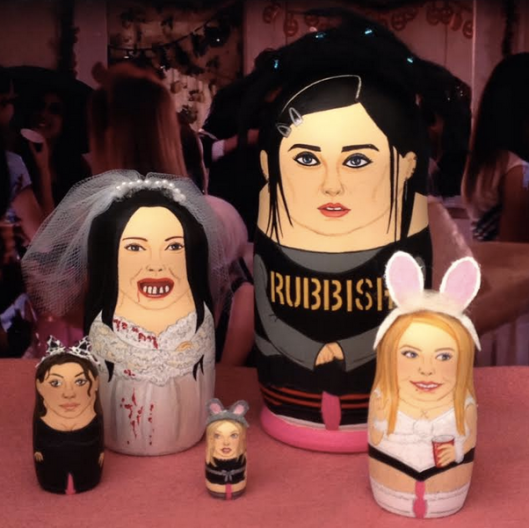 This is, hands down, my favorite Indiana Jones movie of all time. 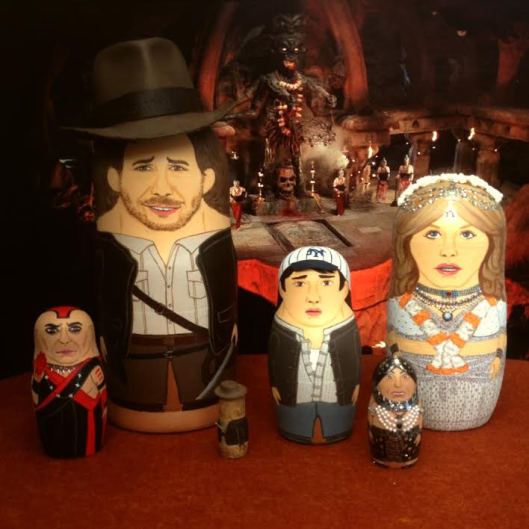 I was asked to paint just an Indy doll for a fan of the movie, but it occurred to me, why not paint an entire set? Then I found a mini hat and thought, hey, why not turn the last doll into a voodoo Indiana?

As a child growing up in the 80s with an older brother, I would watch “Hulk Hogan’s Rock ‘n’ Wrestling” on Saturday mornings as a warm up to the real thing almost immediately thereafter (rounded out by G.L.O.W) before changing out of my pajamas and starting my day. Saturday morning was the only time my mother would allow us to watch TV so my brother and I would abuse this decree to the max. It was quite fortunate also that my mother happened to be a Chinese language arts teacher and had decided to retain our linguistic prowess herself, or else we would’ve had to forfeit our Saturday morning toon time in a Chinese language classroom instead like so many of our Asian peers did. I can’t say my mother’s efforts allows me to speak Mandarin as fluently as I’d like, but I am grateful for being able to soak up as much 80s pop culture as I could back in the day because it’s quite useful in my line of work these days, largely because I know what people are talking about when they come to me with proposals.

Like always, I am always thrilled to receive emails from people requesting sets from my childhood, but this latest one took the cake. I was asked to paint the “old school” WWF stars so I was beside myself, thinking: Junkyard Dog! Andre the Giant! Roddy Piper! Mr. Fuji! Wendy Richter! The Iron Sheik! But I must’ve been A LOT older than the requester because aside from Hulk Hogan and Ric Flair, I only vaguely remember the rest of the wrestlers in the lineup since by the time these guy came around, I was already a teenager and was busy smuggling V.C. Andrews books into my room. Still, this was a fun set to paint and I am now moving things around on my schedule just so I can paint the wrestling stars from my childhood. 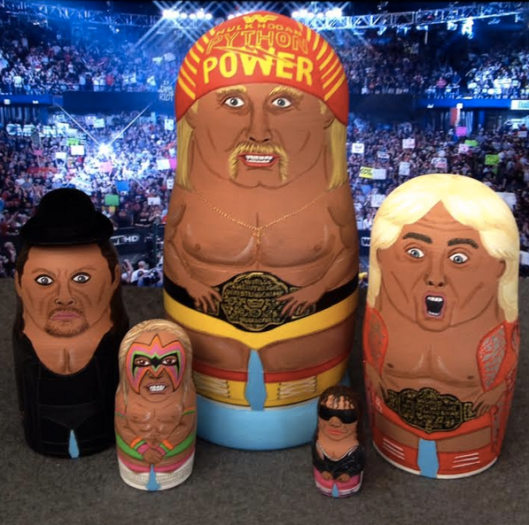 This set features Hulk Hogan, Ric Flair, The Undertaker, The Ultimate Warrior, and the ever so sexy Bret Hart who probably goes through a gallon of Soul Glo a week.