It all started out as a joke. A customer sent me a photograph of a cake shaped like a cockroach because that’s the kind of stuff she does. After I stopped laughing, I passed it on to a friend a told her it would be funny to present something like it for the hubs’ birthday, as Anthony is deathly afraid of the itty bitty vermin. Honestly, we’re talking about a man who has faced crocs and sharks on a regular basis whilst on his kayaking expeditions yet he’d scream for me to come and kill the roaches. I can’t tell you how many time he’s run out of the house and wouldn’t come in till I got rid of it.

As luck would have it, my friend Kristy actually knew an award-winning cake maker who made it happen. I can’t say the roach has cured the hubs of his fears, but he can safely say that he’s had himself a birthday—fear-factor style—by eating a cockroach! 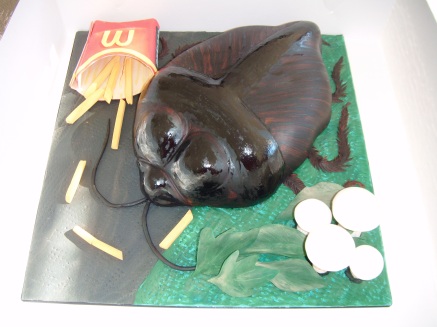 Come on, a cake like this can’t be bought from ANY shop! When it was unveiled we basically just stood around and stared at it, our mouths open. No one can work fondant like the fabulous Debbie Crispin. 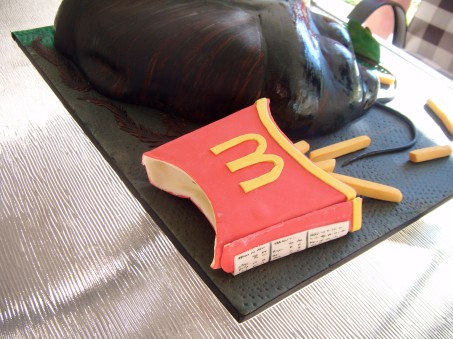 We didn’t even bother with candles or the birthday song. The cake absolutely overwhelmed us. 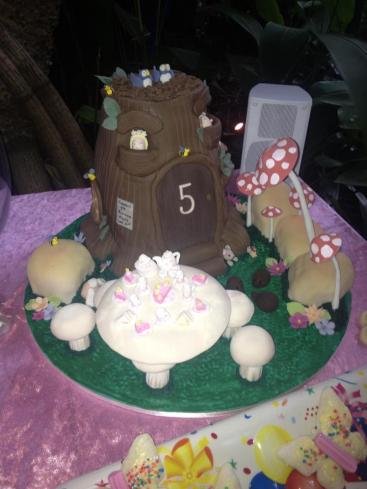 This was another cake Debbie has made earlier for Kristy’s daughter Charlie’s fairy themed birthday. Yes, that’s a full miniature tea set and cake on the toadstool table. There was a debate then whether or not the cake should be cut up, but with eight little girls hopped up on sugar and wanting more, Kristy had no choice…although she did manage to salvage the entire tea set and the woodland critters! We didn’t have much problem cutting up the roach cake…as it was chocolate and it’s been a whole month since I had any sugar based product and I was itching to have a go at it!

Thanks, Debbie! You rock! It’s a joy to have someone as talented as you to be a part of our special days.

It’s no secret that I’m a fangirl. I was one of the two females in my year to take a graphic novel class, which was really a fanboy club because our teacher happened to be Walt Simonson, who did all sorts of work for Marvel and DC Comics. On the first day of class we brought in posters and comic books for him to sign. He turned out to be a really terrific guy too…and best of all, he brought round a bunch of his writer/comic book artist friends all year long to hang out with us, including a field trip to John Byrne’s (google him) house where we hung out in his man cave that was absolutely stuffed with comic book and sci-fi paraphernalia and every movie ever made on video (this was the 90’s mind you) for hours on end. I tell ya, that experience alone made getting up early on a Saturday morning after a long night of binge drinking all worth it.

So it’s a thrill for me that this year not one, not two, but three comic book based movies came out. It took me a seriously long time to paint The Avengers, because I wanted to get every detail right! 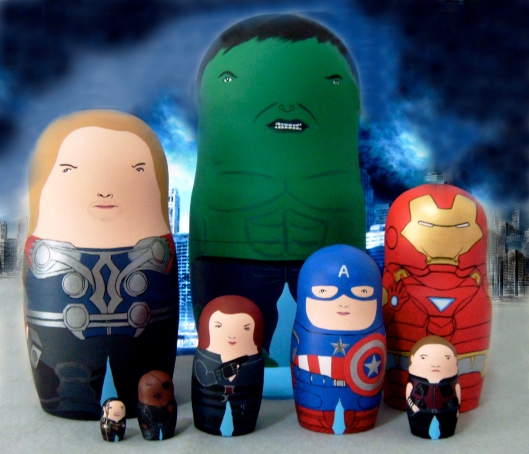 This is a really rare set of 8, which made including Nick Fury and Loki a reality!

The big boy himself: Hulk

Iron Man when he’s suited up. 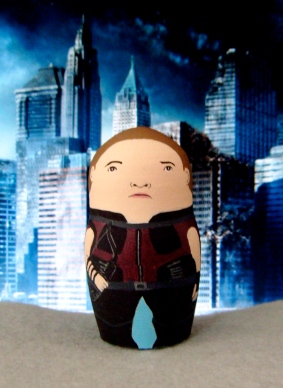 …and Loki. I had a great time painting him as an itty bitty lil’ villain.

On a more serious note, I am outraged and saddened by the shooting at a midnight showing of the new Batman movie in Colorado. It never occurred to me that being a fangirl could cost me my life. Pretty soon metal detectors will be installed at movie theaters. Is this the kind of world we want to live in?

It’s no wonder I got a cold. I went from a pleasant 80° weather in NY to Gold Coast winter and then to the unbearable 95+° degrees in Taiwan with the humidity factor to about 1000° and then back down to 40° nights in Oz in about a month’s time.

So while I was not busy blowing my nose into a tall stack of aloe-infused Kleenex and heating up soup and contemplated the differences between a Snuggie and a Slanket, I made this, mainly to remind myself that I love winter and the cool weather and that I’d just spent a week in Taiwan whining about how uncomfortably hot I was: 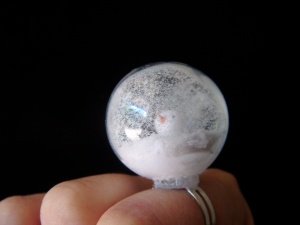 This is a little snowman that I made out of mousse clay and trapped in a glass globe which was set on a ring. The craftsmanship is a bit clumsy since I was a bit delirious from a low grade fever when this was made. I know, it’s no excuse, but here we are.

I had every intention of making a microscopic carrot for the nose, but such things don’t fare well in my studio since I tend to lose stuff as soon as they’re made. Luckily a pencil sitting nearby gave me an idea. I sharpened my orange Derwent to a fine point, cracked the tip, and voilà! A carrot nose on a teeny snowman.

Sometimes I get a little bored painting the same things over and over, so I was thrilled that a request for a different set of Frida dolls came. This one was definitely a bit more edgier than my previous Fridas!

It’s too bad I’ve been fighting a cold while painting this set, or else I’d have dug out my clay and do a 3-D floral headpiece.

Yes, well, I can’t tell you what it says in the scroll since I’ve retained next to nothing from Spanish 101/102. 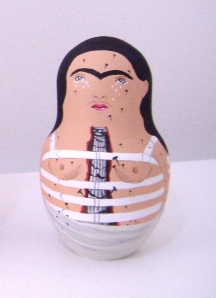 This is my favorite Frida because I haven’t gotten a chance to do anything fine arty since my school girl days. It certainly brought me back to Andy Gerndt’s class at good ol’ SVA. Sometimes a gal just wants to be all deep and profound…especially when she’s watching MST3K’s “The Brute Man” while painting.

Also…if Frida’s alive today, she’d be 105 years old! Fortunately for us her paintings are being shown around the world so in a way, she is really around with us, isn’t she?