I find that, over time, if I want something badly enough, it’ll present itself to me sooner or later. I just have to put it out into the universe and let the Great Being sort it out for me. Such is the case with this set.

I’d been wanting to do “Arrested Development” for a while now. When it was first on the air, I had been losing faith in television programming and was toying with the idea of getting rid of my set and picking up a new hobby. But the Bluths came along and showcased the kind of family dysfunction that I adore and I kept my TV and was glad the Television Gods have heard my prayers. The cancellation of the show was upsetting, but that’s another story altogether. In short, I was asked to paint the Bluths (plus Maeby’s boyfriend Steve Holt to round out the set of 10s), I could hardly keep myself from purchasing a ticket to NYC and hugging the buyer in person. 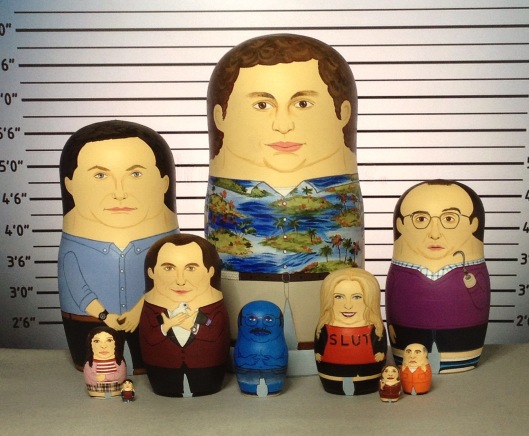 This was, and always will be, my favorite show in the world. It also made me realize I would never A. Be an actor and B. Be an improv comic…not that I ever have aspirations to do either since I’m more of a “behind the scenes” kind of person. I’ve painted Reno 911! a long time ago and was happy I had some time now to revisit it. Painting this set brought up some really happy memories, such as while waiting for an ex-boyfriend to get ready for a night out on the town, I watched half an episode for the first time and knew right then and there I would be a lifelong fan; hosting a girl’s night in with my bestie and the two of us laughing so hard that mops and cleaning products had to be brought out halfway through the viewing.