I recently took a much-needed holiday from both my life and work. The timing couldn’t have been better as I was able to traverse my way from the West Coast to the East with a few stops in-between, attending weddings and piano recitals, family reunions and hanging out with my best friends, all of whom I have known for several decades. I got to tickle babies and take older children shopping while instilling in them the best ways to navigate through the choppy waters of life. I got to get into the field again to do actual research for an upcoming project (David Bowie Is exhibition anyone?) and ate my way from New England to NYC. There were some revelations as to who I am in the great scheme of themes that’s nothing short of shocking but a simple DNA test (in which my mother has gladly agreed to take) should sort things out. I spent some time in the hospital as well, visiting, not as a patient, and got to work on the embroidery project I started a year ago and haven’t been able to complete. All in all it was a very well-rounded holiday although I can’t say I had done any R and R as half the time I was running around, trying to make every minute of my trip as meaningful as I could make it.

You are about to enter another dimension, a dimension not only of sight and sound but of mind. A journey into a wondrous land of imagination. Next stop, the Twilight Zone!

The Twilight Zone is hands down my favorite show in the world. I used to look forward to New Years Eve where I could cover myself with fleece and binge watch every episode straight into the new year. Even when I was older and was expected to show up at events and parties, I still made a point to beeline for a TV and take in at least an entire season’s worth of the eerie tales from another dimension.

I have to admit I’m both a bit thrilled and saddened by the fact that all the Twilight Zone eps are readily for streaming nowadays and I can indulge in my New Year’s eve extravaganza at any time. But it isn’t the same, naturally. I did, however, jump for joy when I was asked to paint some of the old favorites from the show, though, and was grateful that I could watch dozens of episodes while painting it! 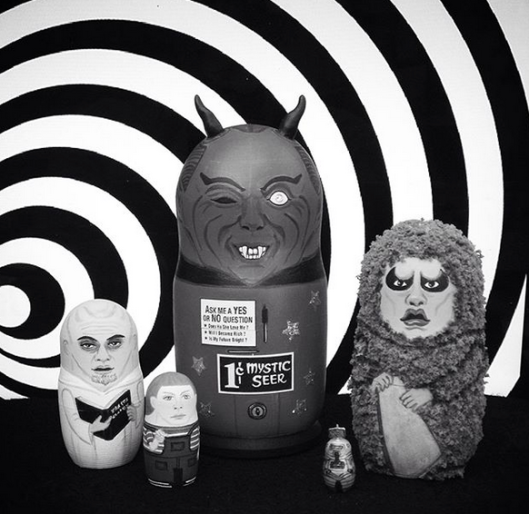 There is something so timeless about good ol’ black and white. But this set was done in technicolor. 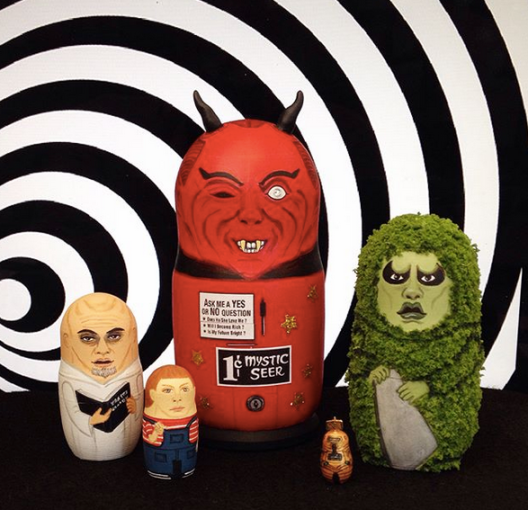 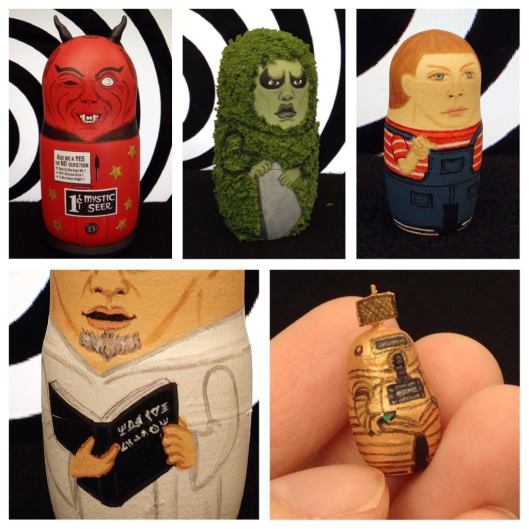 We’ve got the Mystic Seer from “Nick of Time” featuring a couple stuck in a small town restaurant and a pagan napkin holder; the Gremlin from “A Nightmare at 20,000 Feet,” The Kanamit from “To Serve Man,” and the little space man from “The Invaders.”