Can you believe I actually spent the entire 90s without seeing an entire episode of “Buffy the Vampire Slayer?” Yet, when I was asked to paint a set of some of the central characters, I actually knew quite a lot about the show. I must’ve picked up all these Buffy knowledge over the years from reading about it in myriad periodicals…that’s the only explanation. Another one is that maybe I binge watch it in my sleep. Who knows what one does during their slumber? It’s not unusual for me to find cookie crumbs in my bed when I wake up in the morning.

I haven’t had to paint any Stefon dolls for a while because the NBC Store was selling a reproduction of them. It freed up my schedule drastically and I get to paint something other than that Ed Hardy shirt over and over again. But I couldn’t say no when I was asked to paint a large Stefon along with some classic SNL characters, ones I more or less grew up watching. It’s too bad the Church Lady didn’t make it into the final cut…that would’ve really finished me off for sure! However, I’m not complaining about what I had to paint. 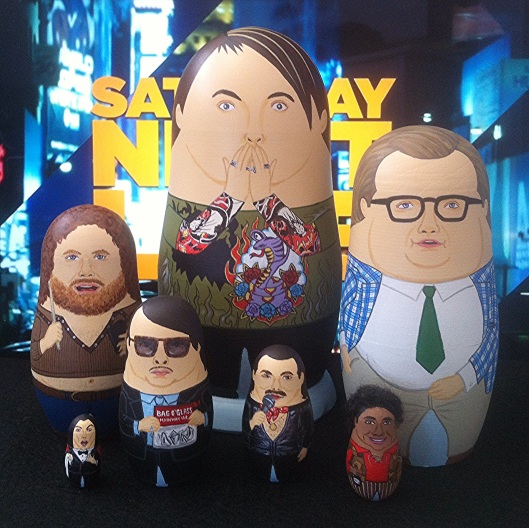 What a line up! There’s Stefon, of course but then we have Chris Farley as Matt Foley the motivational speaker who “lives in a van down by the river,” Will Ferrell as the “more cowbells” guy, Dan Aykroyd as Irwin Mainway and his Bag O’ Glass, Bill Murray as Nick the Lounge Singer, Tim Meadows as Ladies Man, and my favorite, Adam Sandler as Opera Man.

Speaking of Stefons…it was a shock to look up while watching the new episode of “The Mindy Project” to see my little guy sitting on Seth Meyers’ desk.

I can retire now, right?

It’s not every day I do a giant set of 8…especially if there are two sets to work on at the same time! Luckily it’s a set featuring a new sitcom called “Telenovela” starring Eva Langoria that’s all about bright colors and bling and muy delicioso abs and many funny moments all on the set of a Spanish soap opera. I once had a student who would spend his after school art class in my room reading out loud the exploits of Juan-Carlo and Carlotta that he’d painstakingly transcribed in English off shows he watched with his Chinese grandma on Telemundo. It used to drive me nuts, but what else is one to do in an after school art class once they’re done with their assignments? Watching “Telenovela” now reminds me fondly of that particular student and lazy afternoons watching Telemundo with my own Chinese grandma.

Here are Set A and Set B of the core cast of “Telenovela” with several slight differences. 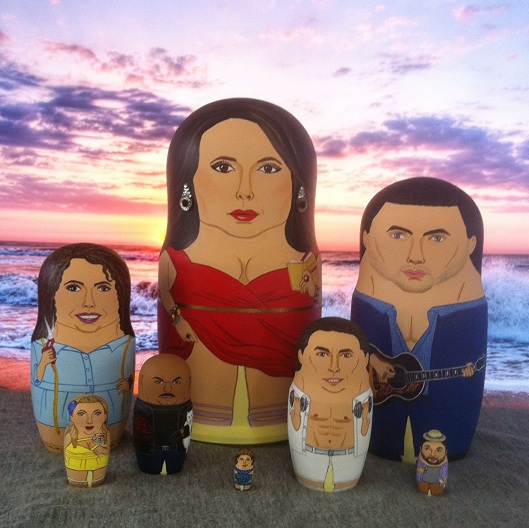 Just letting everyone know that I’m still currently sourcing materials for a very very limited edition of Pink Flamingos. As for the other sets, there will also be a limited number scheduled to be painted in August. Check back for more deets then! Thank you so much for your interest and inquiries! All my work are hand made in my little sweatshop, so it’s not humanly possible for me to make more than a few of these dolls at a time.

In the meanwhile, here’s a little video made by the outrageous Emi of The Pygmy Hippo Shoppe (sadly, she’s also sold out but check out her other fabulous wares!):

And here we are, another John Waters/Divine collaboration “Polyester” immortalized in nesting doll form.

What to do when you have too many ideas for a set of dolls? You paint TWO versions of it!

Version 1 is a customer version of “Female Trouble,” a John Waters treat featuring pre-accident Dawn Davenport and Aunt Ida. We had to throw in John Waters as the last doll, just because. 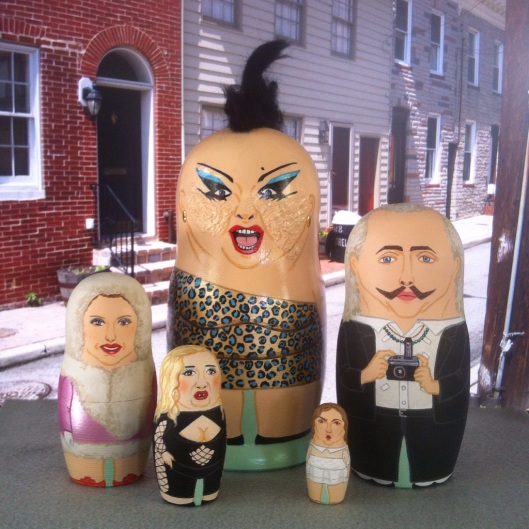 Version 2 is a full set of most of the cast featuring a post-accident Dawn Davenport in that outrageous gold and blue leopard print dress and mohawk, Donald and Donna Dasher, Aunt Ida again (boy, John Waters enjoys squeezing his plus-size actresses into form fitting outfits, doesn’t he?), and of course, little Taffy Davenport. I was still tossing up weather or not to recreate Dawn’s scarred face toward the very end. I couldn’t resist doing something different. Same with the mohawk, which was the most fun I’ve had in a long time.