Every year around this time I would have to screen “Beetlejuice.” Unlike most, I actually watched the Beetlejuice cartoon series first and found Beetlejuice and his relationship with Lydia kind of cute, albeit in that teen-girl-hanging-out-with-a-slightly-inappropriate-uncle sort of way in the animated series. But I get it. I had an older male baby-sitter, who, in retrospect, was really just a high school senior at the time, but he had a full beard and a luscious mullet and was slightly larger than average so I had always figured him to be in his 40s and he would often ride off into the sunset with my newly acquired dirt bike, vowing never to return, but then he would, armed with homemade cassette tapes of his drum solo. Looking back, he is really awesome and I was lucky to have him instead of someone from The Baby-sitters Club who would be all up in my business with coloring books and solving my 8-year-old problems for me. No thanks.

Anyway, I have done a Beetlejuice set a long time ago and always meant to update it, perhaps with Lydia in her red wedding gown. It didn’t happen this time, which means there’s always the next. I did do something fun with the Maitlands, though, and added Miss Argentina into the mix. 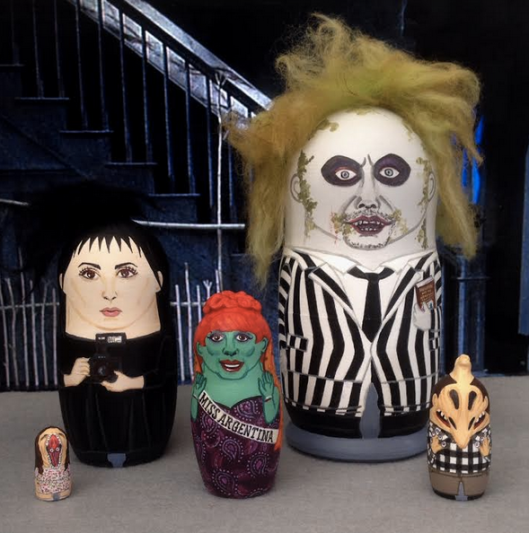 At this go, I have almost the right shade of green wool to make Beetlejuice’s hair, although it did have to be dirtied up slightly.

Making Lydia’s hair was fun although I would have preferred to make that enormous wide brimmed hat.

This version of Adam and Barbara Maitland made them seem a lot less vanilla and a lot more fun to paint!